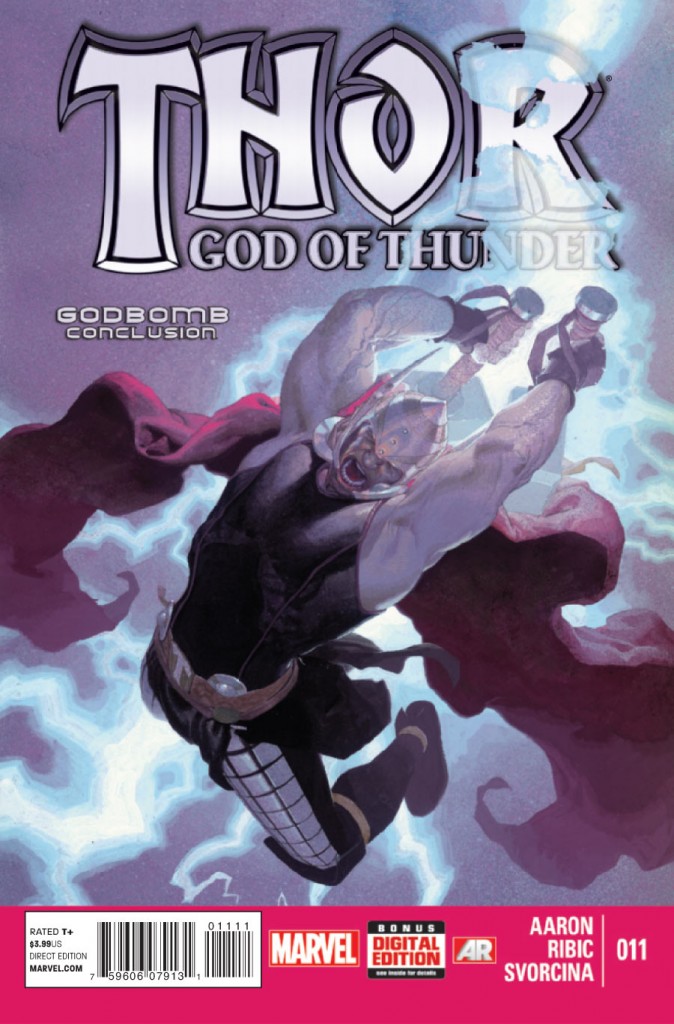 “Thus endeth the tale of the God Butcher.”
– Thor

It’s taken 11 issues and two story arcs, hundreds of panels and thousands of words all spent on telling a single and this in service to a character that I was not overly enthusiastic about.

And it was glorious.

Issue 11 of Thor: God of Thunder wraps up, not only the current Godbomb story, but the entire arc featuring Gorr, the god butcher, that began in issue one. Jason Aaron has made me care about the blonde thunder god in a way that I never thought possible, and raised some interesting questions about the need for gods and for faith all across the universe that still linger. What Aaron has done here is create a lasting impact in the minds of the readers, which is only place he really can within the constraints of company-owned characters. And is that not the worthier goal?

I would be doing this book a great disservice if I didn’t talk about the absolutely beautiful art of Esad Ribic, who drew nearly every page of this epic story. Everything from the characters, to the colors, (most often provided by Ive Svorcina) to the gorgeous backgrounds evoke a sense of foreboding, dread, melancholy, and mourning as god after god dies at the hands of Gorr. I cannot imagine the difficulty involved in getting three Thors standing side by side to look distinct, much less as uniquely powerful and full of personality, as is done here. It looks like we’ll get one more issue from Mr. Ribic and then art duties will fall to Ron Garney for a while, but I personally hope that we get to see more of Ribic’s art in Asgard and elsewhere in the Marvel U.

Buy It – If you’ve been reading Thor: God of Thunder then you’ve already got your copy of issue 11, and you’d do better to read that than my review of it. If you’re not, I can only recommend the first collection, The God Butcher, and tell you to read that until issue 12 and the return of Thor to Earth. My only complaint with issue 11 is that it concludes a little too tidily for my taste, but with Infinity landing this week and the second Thor movie coming up this year, it only makes sense. Enthusiasm for this character is certainly mounting, so if you haven’t already, take a chance on the one book in the Marvel Now initiative that had no real right to succeed, but has done so as soundly as a ringing hammer blow in the heavens.