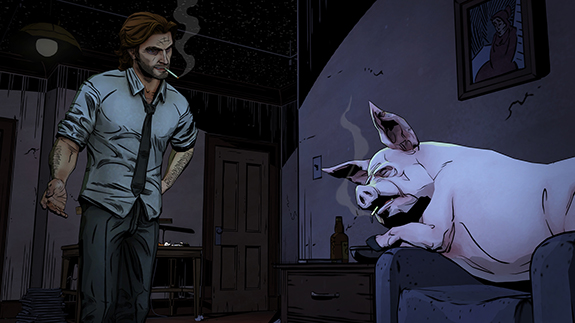 The first trailer has been released for “The Wolf Among Us,” a video game series based on Bill Willingham’s Fables. The sheriff of Fabletown, Bigby Wolf, will serve as the game’s protagonist. Players have to make choices and live with the consequences, as Bigby tries to hide his community of fairy tale creatures on the dirty streets of New York.

“The Wolf Among Us” is a point-and-click adventure game by Telltale Games. Its format will resemble the company’s “Walking Dead” series. “The Wolf Among Us” will also be made up of multiple episodes. The trailer reveals that episode one of the series is titled “Faith.”

The game still hasn’t been given a release date; the trailer merely says it’s coming soon. The game’s development was first revealed back in 2011. The first episode was due to be released in 2012, but after multiple postponements it’s expected to be released in late 2013.

Fans can get the first look at the series by attending the Seattle gaming convention PAX Prime from August 30 to September 2. Upon release the game will be available for purchase on the Xbox LIVE Marketplace and the PlayStation Network.

Those unfamiliar with the Fables franchise need not worry, “The Wolf Among Us” will act as a prequel to the comic series. The Fables comic, published under the DC’s Vertigo imprint, began in 2002. It’s still going strong with well over 100 issues and multiple spin-offs. Fables has also received countless awards and high praise from virtually all sources.

This video game isn’t the first attempt to expand the  Fables universe beyond the printed page either. NBC and ABC both pursed a television adaptation, but neither attempt panned out. However, both networks later produced shows which incorporated gritty updates on fairy tale characters (Grimm and Once Upon a Time). Warner Bros have a  live-action film adaptation in the works now. The movie has writers, a director, and the producer of the Harry Potter films attached to it.

Are you excited for “The Wolf Among Us”? Let us know in the comments below!