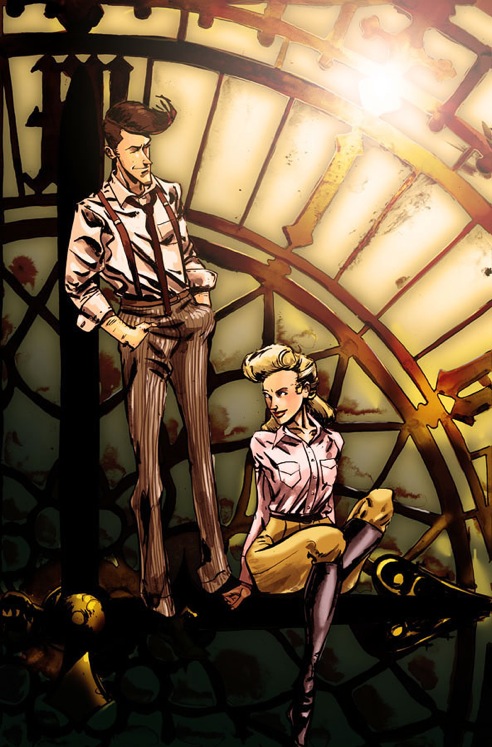 With this week’s release of Peter Panzerfaust #13 we are now over halfway through the third arc in the series. Over the past two issues Wiebe has taken some time to develop and expand the attention deprived Darling boys, and the fairly unknown Felix. Issue #13 doesn’t spend as much time on characterization, but pushes the events of the arc forward in a frantic, nail-biting splendor.

The art in this issue looks rougher than usual. It’s possible that it was Jenkins intention to roughen things up to fit the heart-racing pace of the pages. There was one instance however, where it looks as though one of the characters is missing part of their arm. Perhaps it’s the angle, but it is something that popped out at me.

Heather Breckel continues to provide some beautiful colors, and establishes the solemn tone of the issue in the early dawn fighting. She is an amazing asset to the overall quality of Peter Panzerfaust.

The story is reaching its climax, and some interesting elements are presented through the eyes of Felix. He’s been a loner after his rescue at the end of the last arc, and maintains a different view on everything than the others. It’s through Felix that some eyebrows are raised, and we begin to question and second guess the actions of Jacques. It may be a red herring, but Wiebe now has us observing the events with a more watchful eye; the slight twist provides us with a reason to re-read this and preceding issues.

Without spoiling much, the issue ends badly for one character. What happens is pretty crappy, but ultimately do we care? Sure the role this character played was large, but we’ve never really gotten more than a glimpse of it or who this character is.

Peter Panzerfaust #13 is a strong issue in the series. It suffers from a few minor hiccups, but the overall pace and franticness of the issue should get your heart pumping as the boys run through the woods towards danger.