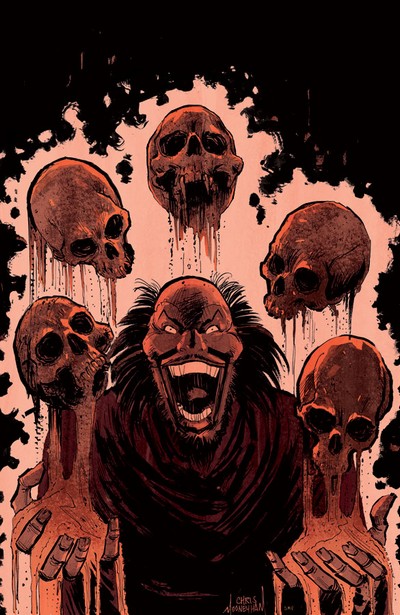 Infamous treasure hunter Fabian Gray has been possessed by five literary ghosts after an encounter with a mythical artifact known as “The Dreamstone”. The wizard, the archer, the detective, the samurai and the vampire accompany Fabian on his quests, endowing him with their unique powers as needed.

This final issue of Five Ghosts has a few good reveals. First, what actually happened to Fabian’s sister, who sits in a coma. And why Fabian is torn with guilt over it. Second, whether Fabian passes the test of his five ghosts, which if he succeeds, will allow him to better control and understand his power. Third, how will Fabian and his best friend Sebastian fare against the dragon morphing super wizard who has been sent to steal his dreamstone?

Ok, some of these questions are answered. Five Ghosts has been a very pretty adventure, visually. It’s been stuffed with story and characters with very real torments. The writing has been quality and the art equally well developed. Overall, I’m glad I read the series. As a final issue, though, I’m unsure of how to grade this one. It’s as fun as all the others, but it doesn’t feel like a finale. There are still puzzle pieces missing, the two biggest in fact. Who are the bad guys after Fabian’s power and how can/will Fabian save his sister? I’m not sure if it’s been closed this way in preparation for a continuation of the miniseries at some point or not, but I can’t help feeling a bit underwhelmed with the lack of closure.

Verdict: You should definitely read Five Ghosts, it’s a unique and artistically pleasing series. Like Indiana Jones on acid, this story is a wild ride, just don’t expect an ending that feels like an end.