Hey there, readers! It’s been a few months since one of these round-ups, and I would like to apologize for that. You see, at the end of last month, I had this little thing going on with a wedding. Things got hectic, and I just plum forgot about this here ol’ round-up. Now, I’m a married man, and things ain’t all that bad. I wear a ring now. It’s not one them lantern corp rings, or a ring meant to rule over all of creation. It’s a different sort, but it comes with its own set of responsibilities. It’s a symbol of the love between myself and my wife. It represents our unity. 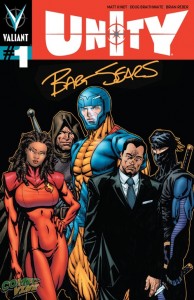 BAM! There we go tying everything together! It’s been reported on sites all over the internet, and even here on the Talking Comics podcast. This fall Valiant is launching their second big event, Unity. Toyo Harada (Harbinger, Harbinger Wars) is uniting the various heroes of the Valiant universe to take on X-O Manowar and the possible threat he represents to earth. This is looking to be even huger than Harbinger Wars.

Valiant is even bringing back a few classic Valiant artist for some variant covers. Comic Vine had the exclusive and revealed the Unity cover by Bart Sears. More of the new Signature Series of covers can be found over at Valiant.

Wrapping Up the Summer Events

Over in X-O Manowar, “Planet Death” wrapped up. It was a fun story-arc that showcased the incredible power and influence the X-O armor has in the Valiant universe. As a result, Aric has lead a group of formerly enslaved humans back to Earth, where he has settled down and claimed a part of Romania as their new home. The Eternal Warrior even shows up in issue #15, and you can read that review here.

Harbinger Wars also concluded in a mess of explosions and blood. There are still a few threads left untied, but it looks like they will be getting addressed soon. The full review of the finale can be read here.

This series has just kicked off, and while the first issue was good, the second was fantastic. If things keep going at the pace, Quantum and Woody is going to be one of the top series around. Or at least the top of accidental penis touching comics (read issue #2!).

There is no news yet on the goat or his whereabouts.

Just out of curiosity, what are your favorite Valiant titles right now? Rank them or talk about your favorites in the comments below.
Here’s mine:

That’s it for now. I’ll be at Dragon Con in a few weeks, so let’s plan for the next one of these at the end of September after the release of Eternal Warrior. If you’re also headed to Dragon Con feel free to contact me via twitter @KnowNothingNerd prior to the con (I’m in from out of the country, so I won’t have a smartphone at the con).