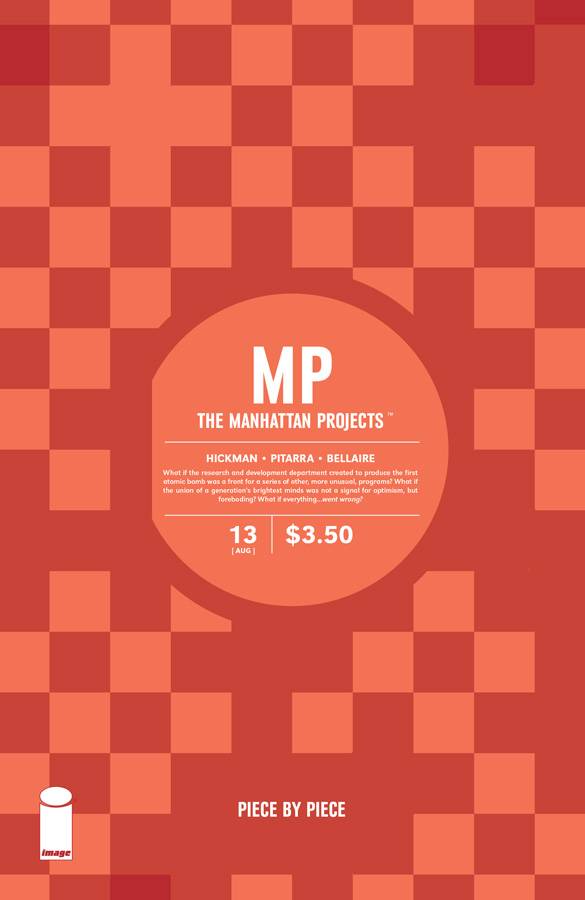 There is a tidbit of conventional wisdom that most of us hold to be fact: The truth is stranger than fiction. I believe that somewhere in the dark corners of Jonathan Hickman’s brain he’s decided that he can disprove this little idiom. Nowhere is this more prevalent than in The Manhattan Projects, where characters who carry the names and likenesses of real people play out an absurdist version of what really went on down in the secret halls of those scientists who created the first atomic bomb. The stories contained within are all fiction and no truth, but I’ll be damned if they aren’t strange, delightfully twisted, and deliciously weird.

Issue 13 has a small wrap-up to the events at the end of issue 12 and then jumps ahead a year to look at what each of the characters in this menagerie of macabre science is working on. I’d hate to spoil anything that happens in the book, but here are a few images to let you know whether this is the kind of book you’re looking for: Al Einstein, elbow deep in purple blood, holding a hacksaw; Harry Daghlian bathing in an active volcano; JFK doing coke in the oval office; Laika the talking dog blasting off in a rocket emblazoned with her own image. It’s okay, let it sink in.

The art is unconventional, the colors are sometimes disorienting, the writing is nothing short of bizarre, but these aren’t criticisms. These are the reasons to love this book! With some of the boldest and most fascinating covers in all of comics and what I believe to be the most original story you’ll find anywhere, The Manhattan Projects deserves not only your consideration, but your dollars. And your loyalty. Or else.

Buy it! Issue #13 is as much of a jumping on point as you’re going to get in this story, and Mr. Hickman and company insert a very helpful appendix at the end of each book with short descriptions of the cast that can serve to catch up any newbies. Historical? Maybe, but don’t expect much actual history in this book, but do expect a trip into the fiction of the strange.