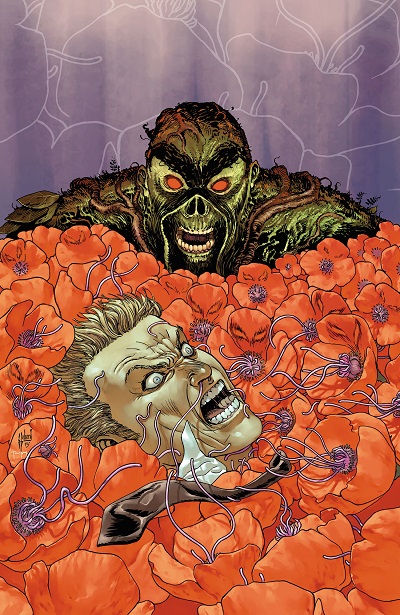 Warning: Spoilers from Swamp Thing #22 are in this review!

Things got delightfully out of hand in last month’s issue of Swamp Thing, which tends to happen when dealing with a demon whiskey tree (or just regular whiskey for that matter). It was a creepy and fun installment, and issue #23 wraps up the two-part arc in much the same fashion.

We open to find our favorite walking salad in need of a watering can and some sunshine in the worst way after a spell from a deranged John Constantine has cut him off from the Green. Laying in pieces in a jail cell, Swampy can only watch as the Scottish village of Fetters Hill tears itself apart thanks to the whiskey tree that was planted by Seeder. While the chaos rages on outside, the Avatar of the Green makes a last ditch effort to stop the madness of the townspeople as they attempt to bring the tree’s poison to the outside world.

For all its depravity and violence, this is a pretty fun issue. Kano and Lapham’s illustrations are brilliantly chaotic and unhinged, with King John Constantine and his crown of broken glass being a highlight. The opening scene especially feels like something out of a nightmare as we are treated to images of a throng of lunatic villagers who look part angry-mob-from-hell and part zombie horde.

Charles Soule nails down the voice of John Constantine perfectly, pumping the magician’s signature dry humor into every scene he’s in. This balances out the horror and tension in store for us in the rest of the pages. Soule does a fantastic job exploring what would happen if the hidden evils in polite society were ever to pour out into the streets.
He also continues to hint at a darker side threatening to take over Alec Holland, as that angry little voice from the Green that’s been whispering in Swamp Thing’s ear grows louder and louder. The issue’s conclusion appears to be setting up the inevitable clash between our hero and Seeder, which already feels different from similar conflicts because the villain seems to genuinely believe he is doing good in the world. It’ll be interesting to see what Soule has up his sleeve in the months ahead.

Get your paws on this book, posthaste. If previous issues hadn’t already, “The Whiskey Tree” should dash away any and all doubts about Swamp Thing’s new creative team. Soule, Kano and company have been killing it.