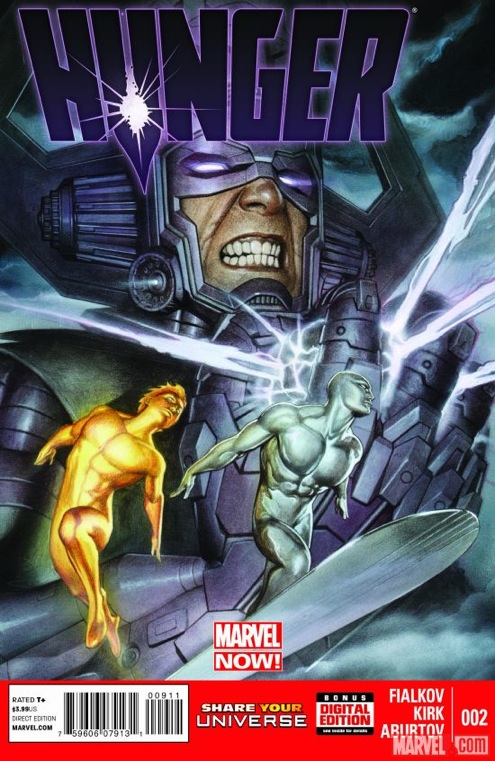 In the first issue of Hunger Fialkov introduced many readers to the Ultimate Universe’s Rick Jones, a boy chosen by the Watcher to be a protector and savior of the universe. The issue was kept fairly light in tone with Jones’ back and forth dialog with the Watcher. Rick’s naivety and lack of understanding of the ways of the universe mirrors that of the reader and those of us unfamiliar with the Ultimate Universe. Fialokov uses the exchange between Rick and the Watcher as a way to bring us in and setup the story that really begins to unfold in issue #2.

Last month ended with the not so surprising reveal that Galactus has crossed over from the mainstream 616-universe into the ultimate 1610-universe. Fialkov introduces this universe’s Silver Surfer into the mix, and he had some pretty cool scenes, but ultimately the story hasn’t moved forward too much since the end of the first issue. Some big, destructive, oh s**t moments do take place, so there is stuff happening that will keep you entertained and engaged throughout the issue.

Kirk and Aburtov lend themselves heavily in providing the art necessary to convey and encapsulate the epic nature of the events that are unfolding. The newly merged Galactus looks absolutely gorgeous and terrifying. There is no doubt in my mind that their art is one of the main attractions I have with Hunger.

We are only two issues into the mini-series, but I feel that perhaps more should be happening to give events the necessary time to play out and be resolved. While things have been fun so far, and Fialkov has done a great job of keeping the book entertaining, I have my worries. Hunger is dealing with some of the fallout of Age of Ultron, but at the same time it is setting up events in the Ultimate universe for the “Infinity” mega-event this fall. It is both an aftermath and a prelude story, and I’m not quite sure how I feel about that.

Fialkov has proved himself in recent memory with writing some pretty fun, engaging, and epic stories, so I’m willing to sit around for the remainder of the mini-series. I am having fun with what we’ve seen so far, and I am interested to see how the Ultimate universe gets tied into the events of the 616-universe.

If I look at Hunger as its own separate miniseries, I am thoroughly enjoying it for the sheer craziness of a super-powered Galactus on a binge in the Ultimate Universe. Although some serious stuff is going down, it still feels fun. However, what has me concerned is how it will tie into upcoming events, and if it will be something that can be read on its own in the future. If you are interested to see how the Ultimate Universe will tie in with everything this fall, then you might want to pick up this mini-series. If you are suffering from event fatigue, then maybe give this a pass for now, as any major plot points will most likely be summarized in the larger fall event.