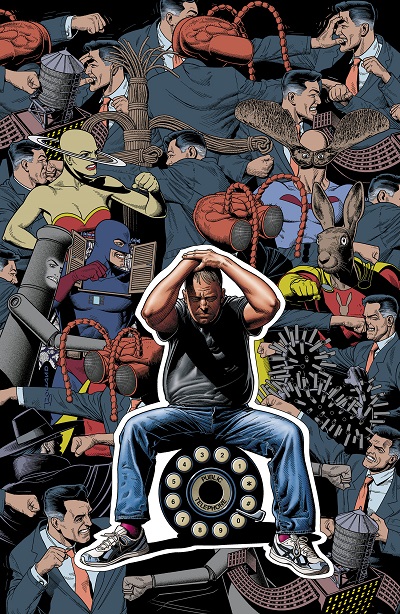 What can be said about a series like Dial H?  It’s certainly left us guessing each month.  What strange new hero would appear next?  What screeching left-turn plot twist was going to be dropped in our laps?  It’s stood out from pretty much everything else DC has been publishing lately, forging its own world while still being aware of the universe it inhabited.  Over the span of 15 issues it’s seesawed back and forth between delightfully jaw-dropping bedlam and head-scratching gibberish. Yet, it never seemed to lose its confidence and as many of the fans who have stuck with it during its run will tell you, that’s exactly Dial H’s charm – it’s unflinching and unapologetic commitment to being whatever it wanted to be.

In its final issue we find Nelson Jent, Roxie Hodder and the rest of the Dial Bunch arriving at the connection point where all realities meet.  There they square off against the Centipede, Fixer and the mysterious Lost Operator in a struggle that will cost them dearly and determine the fate of countless universes.

As always Alberto Ponticelli’s artwork is incredible and he closes out the series in grand style.  There’s a weird sort of chaotic synergy in his action sequences that makes your head spin as you try to keep up with everything that’s happening.  Tanya and Richard Horie’s colors enhance these scenes wonderfully, sucking you into the Dial Bunch’s epic battle and adding to that sense of disorientation.  It’s pretty exhausting at times, but it’s part of what makes this series so much fun.

It would have been interesting to see how China Miéville’s original storyline would have played out in a longer run.  As has been the case since its cancellation was announced, the plot threads of Dial H have felt significantly rushed, making it even more confusing than what we’d been used to.  But in a strange way, this results in a sort of exhilaration.  It feels like Miéville and company took their situation in stride and decided to run full tilt to the finishing line rather than limp along.  There are some great surprises and payoffs in Dial H #15, and though it’s not entirely the epic conclusion we were hoping for, it’s still one hell of a mind-bending read.

If you’ve stayed on the line this long, then buy Dial H #15.  While its cancellation has resulted in not quite the ending fans have wanted, at least it tries to answer some questions that have been dangling since it began.  Its boldness and originality will be missed.