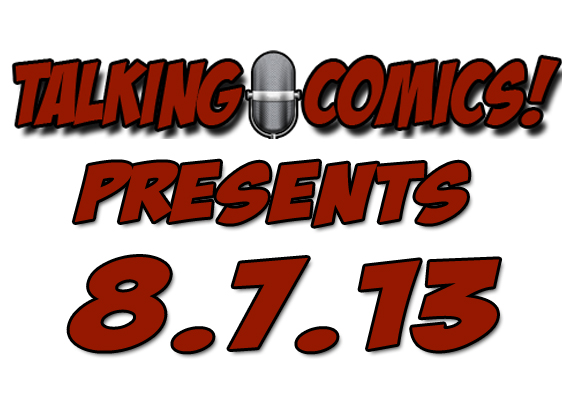 Well, enough with the who, where, what, why and how, I give to you Talking Comics Presents for the comic book releases on 8/7/13. 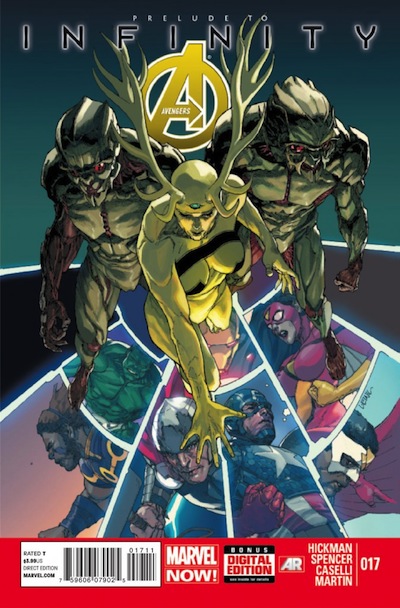 Marvel says: ALL QUIET’ The Avengers recruit more members to deal with the soon-arriving threat to Earth. The Builders enter the Marvel Universe. The Finale of the Prelude to INFINITY: Part Four.

Michael Duke says: “All of Jonathan Hickman’s Avengers has been a brilliant, strange, and fascinating trip so far, and the magical mystery bus doesn’t seem to be slowing down for the upcoming Infinity event. Issue 17 looks to be the last issue before the event begins in earnest, and I’m more than a little eager to take the ride.” 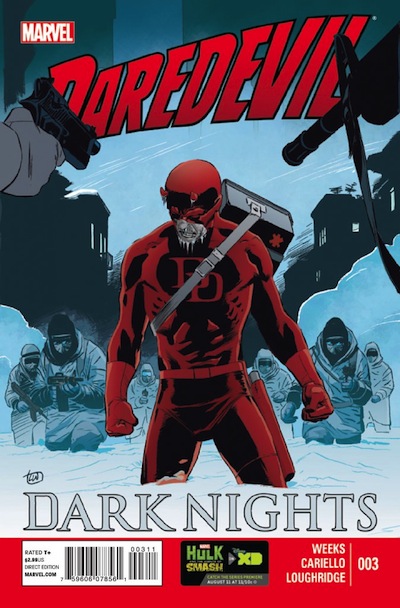 Marvel says: Lee Weeks concludes his chapter in this special series of extraordinary creators celebrating the Man Without Fear! Everything may stand in his way but nothing will stop Daredevil from rescuing a young life! Will Matt Murdock survive the senses-shattering finale to ANGELS UNAWARE?!

Joey Braccino says: “Comics legend Lee Weeks brings his self-contained story, “Angels Unaware,” to a close this week! Daredevil is on the ropes as he tries desperately to literally carry a heart to a girl in need. Weeks’ deft character work gets to the heart of Matt Murdock, and Dark Knights offers a continuity-lite insight into Ol’ Hornhead’s mythos! Check it!” 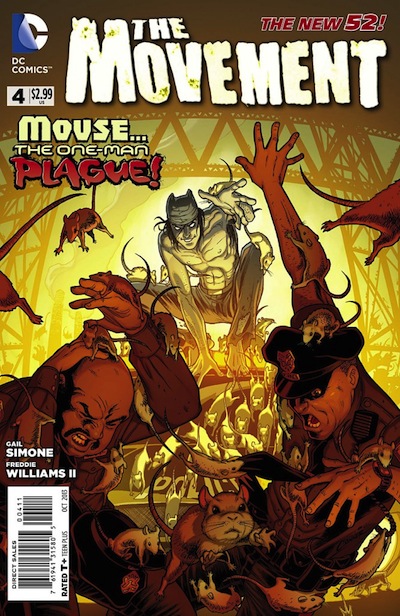 DC says: The Movement takes a stand against the police that they can’t come back from, and Coral City is on the brink of war!

Bob Reyer says: “It seems as if there’s an escalation of hostilities in Coral City, and paraphrasing Alan Moore “Who polices the Police?”; in this case it’s “The Vermin-ator”!”

Princeless: Tales of Girls Who Rock 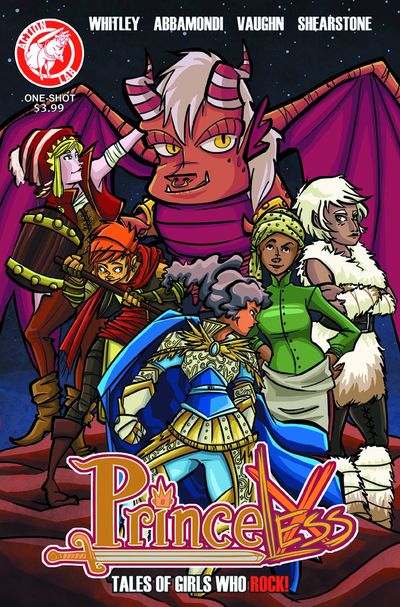 ACTION LAB says: Princess Adrienne is on the loose again, and this time she brought some friends! While Adrienne may be the first runaway princess, she’s certainly not the only girl who rocks! Come join Adrienne, Bedelia, Sparky, Tempest, and some brand new friends in Princeless: Tales of Girls Who Rock, a one-shot sure to introduce you to your next comics obsession!

Bob Reyer says: “Princeless is a simply wonderful all-ages book, and by that I mean children and adults can both read this and find enjoyment, which is a rare thing in this day and age. Throughout the cast, the characters have courage, spunk and a lovely sense of humour, and the stories and art always deliver a gentle but positive message. Even better, Sparky the Dragon is back this issue!” 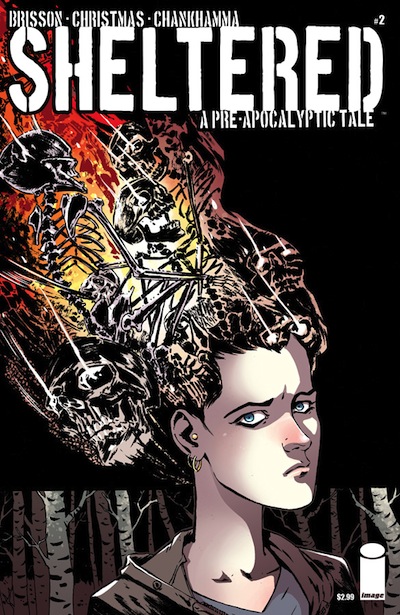 Image says: With their parents’ blood on their hands, the youth of Safe Haven begin to splinter as doubt is cast on Lucas’s leadership. New arrival Victoria finds that escaping from a compound built to keep others out is near-impossible.

Michael Duke says: “I simply cannot wait to see the follow up to what was the most shocking and exciting book I read last month. I went in expecting very little and found quite a lot in this story of doomsday prepers and the pre-apocalypse. I can only hope issue two out-strips the first!” 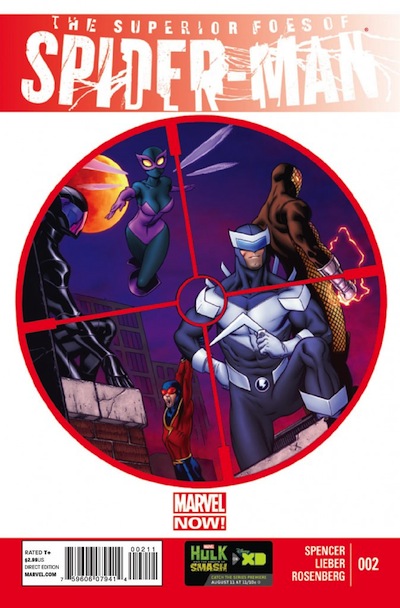 Marvel says: With superior villains come superior problems as the year’s sleeper hit continues! Out of bail and aiming to stay out of jail, Boomerang must get his cronies on target – but does the PUNISHER have them targeted already?

Steve Seigh says: “I love, love, LOVED the first issue of this series last month and can’t wait to check this one out. If it’s even close to being as funny and entertaining at the debut issue was then we are all in for a major treat. We need more “funny” books on the shelves and I’m hoping that this will continue to entertain on that front. 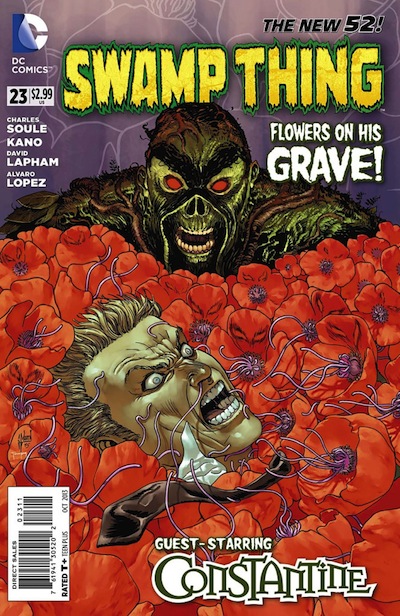 DC says: Swamp Thing just might have to destroy an entire town’s worth of people in order to keep balance in the Green…and he’ll have to crush John Constantine right along with them!

Bobby Shortle says: “I was extremely reticent about Swamp Thing after Scott Snyder left the book, but Charles Soule has proved to be a more than ample replacement. The first of his tow part “Whisky Tree” arc was awesome comic book storytelling and I can’t see how it all resolves.” 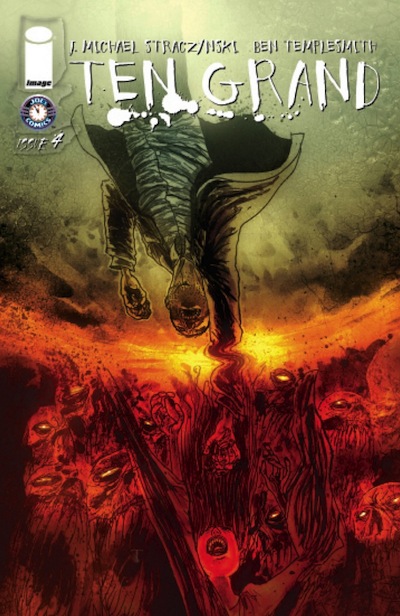 Image says: “Joe Fitzgerald has been to heaven many times…or at least someplace that looks a lot like heaven if you didn’t know any better. But now he’s going somewhere he’s never been before: into Hell itself, in pursuit of the woman he loves. What he finds there will change his life forever.”

Melissa Magan says: “I’m really looking forward to Ten Grand #4 this week. It’s been incredible, just really intense and weird. Ben Templesmith’s art is always unmistakable and works perfectly with the story. It’s one of the best books out there rigth now, no doubt.“

Vertigo says: “It’s the year 3797, and botanist Nika Temsmith is researching a strange species on a remote science station near the outermost rim of colonized space. It’s the year 1921, and renowned English explorer William Pike leads an expedition into the dense jungles of Peru in search of the fabled ‘Lost Temple of the Incas,’ an elusive sanctuary said to have strange healing properties. Two disparate souls separated by thousands of years and hundreds of millions of miles. Yet they will fall in love and, as a result, bring about the end of the universe. Even though reality is unraveling all around them, nothing can pull them apart. This isn’t just a love story; It’s the LAST love story ever told. Trillium is an 8-issue series that combines rich historical adventure and mind-bending science fiction into a sprawling, unconventional love story by Jeff Lemire (SWEET TOOTH, CONSTANTINE, ANIMAL MAN). This amazing miniseries kicks off with 28-pages of story in a flip-book with two covers and two separate but connected stories!”

Bobby Shortle says: “To say I expect great things from Mr. Lemire’s new Vertigo mini series is a stunning understatement. Mr. Lemire is a true comic book auteur and when he puts both his writing and drawing talents to work we get titles like Sweet Tooth, Essex County and the Underwater Welder. All that adds up to Trillium being my most anticipated book not just of the week, but of the year.

Patrick Brennan says – “There are two things I’m expecting from this series. The first is for it to be fantastic.  The second is that at some point during its run, I’m going to cry like a baby.  Jeff Lemire has clearly emerged over the past couple of years as one of the best writers in the business, and he’s done so through emotionally charged and addictive stories featuring characters that, even if they have antlers, feel as real as any friend or loved one in your life.  Trillium‘s premise is intriguing and the fact that Lemire will be drawing it as well makes it all the more exciting.  Wednesday can’t come fast enough!”

Adam Shaw says: “We’ve seen Lemire do some interesting stuff with love stories in his independent work. In his art he’s able to capture emotion in many of the silent scenes as well. Mixing in some sci-fi and possible time travel has this geek super excited!”

Michael Duke says:  “Everything about this book has me fascinated. Hard sci-fi love story? Check. Something about time travel, space and jungle exploration, and a love story? Check. The LAST love story at the end of the universe? Double check. Jeff Lemire is really knocking it out of the park with everything else he’s writing, and I have a feeling that this one will have escape velocity.“

Steve Seigh says: “Words cannot describe my excitement for the release of Jeff Lemire’s Trillium #1. Teased at New York City Comic Con 2012, this is a return to a project presented entirely by Lemire himself. Don’t get me wrong, I love Jeff, but I feel that he’s at his best when he has total creative control over his work and presents us all with something from his very unique and twisted heart and soul. This is going to be yet another book in a long list of titles this year that simply cannot come out fast enough. Blast off!”

MARVEL says: The End of X-Factor, Part 4 of 6 . Peter David’s epic tale, decades in the telling, draws near its close.

Bob Reyer says: “I have faith that Peter David will provide closure, if not soft landings for the X-Factor cast, but it looks as if Lorna Dane is trying to find her own with her half-brother Pietro!”

Joey Braccino says: “The End of X-Factor” is nigh! This week, Peter David shifts his attention to Polaris and Quicksilver! ::Months-Old Spoilers:: With Polaris’ true parentage revealed, it will be interesting to see how these siblings interact, and just how much snark Peter David can write into their dialogue!!! For witty storytelling and on-point characterization, you’ve got to jump on the X-Factor train while it lasts!”