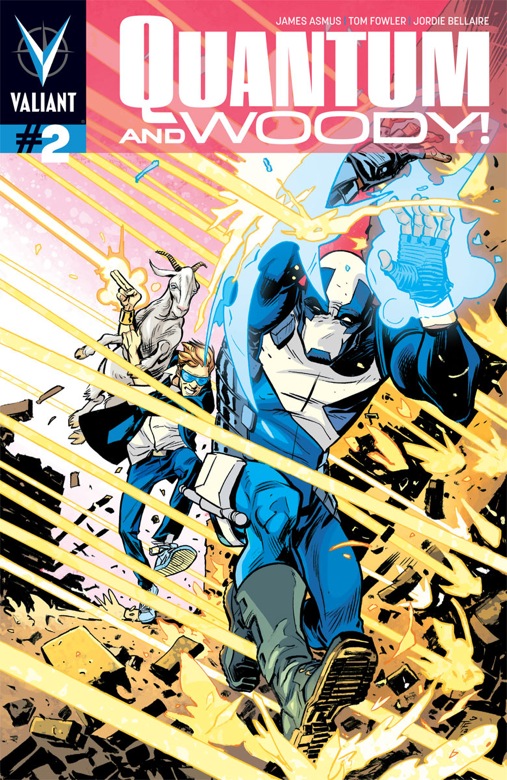 Issue #2 of Quantum and Woody is a huge step up from the already fantastic first issue. The humor and jokes are elevated, and we get to see the boys in their first outing as the “world’s worst superhero team.”

Asmus continues to show us the struggled relationship and dysfunction between the two brothers, but still manages to bring them closer together. They’ve both suffered the loss of their dad recently and survived an explosion that has given them some new powers.

I’m at my parents’ home for the next month visiting, so just this morning I was sitting around talking comics with my stepbrother, so on a personal level I enjoyed seeing the bond between the brothers strengthen this issue.  Asmus is delivering on the funny, but he’s ace at slipping in the more emotional moments that keep us connected to the characters. Anyone that has siblings should be able to appreciate some of the more emotional threads found throughout the issue.

Like in all good comics, the writing alone isn’t what delivers on some of the better moments. The detail Fowler puts in to the characters’ facial expressions is gold. Sometimes people’s reactions to events is funnier than the actual events. If you have the chance to flip through this issue at the store, be sure to make it at least five pages in to get one of the best examples of how the art and writing of Quantum and Woody works so well in tandem. Then, pick up the issue, walk over to the register, buy it ,and take it home to get the entire experience.

There are so many moments in this issue that I found myself laughing out loud, and I have a terrible cough going on right now. That means every time I started laughing, I started coughing hard. It hurt, but it hurt so good. Did I stop from the pain in my chest? Nope, I had to keep on reading.

Only problem with the book: Where is the goat?!

Quantum and Woody #2 is a must buy for me. Now that the boys are in costume and headed off to solve the mystery of their father’s death, we have a more solid idea of what this series is going to be like, fantastic. It’s going to be action packed and filled to the brim with some of the more hilarious moments in comics each month. Seriously, read at least the first 5 or so pages. If you aren’t chuckling, then I don’t know what to tell you.