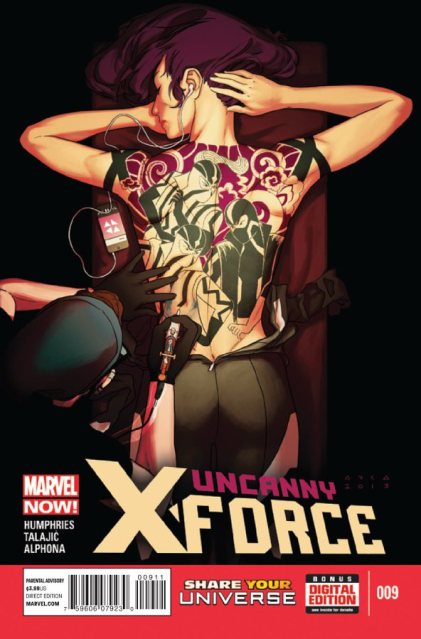 Betsy and Fantomex’s…relationship…is a little strange, to say the least. When all three brains were one, everything was relatively smooth (or, rather, as smooth as it gets for X-Men). Now that Fantomex has been split, Betsy is sick and tired of being pulled from person to person.

The story takes place in two times: one is in Paris shortly after the split, and the other is in present day. In Paris, Betsy confronts Fantomex right after she was almost caught on a heist with Cluster (the female Fantomex). She is convinced that Fantomex sold her out because of jealousy, and then stole Cluster from her. Betsy’s love for Cluster in that moment outweighs her need to exact immediate revenge, and she leaves with the promise to kill Fantomex.

Shift over to present day – Weapon XIII (the dark Fantomex) promises Fantomex to Betsy, giving her the opportunity to finish him off after all the hurt he caused. He is no longer the man with which she fell in love. He is one part of a whole, an unstable personality that continues to gravitate towards the pieces that make it whole.

While love stories in superhero comics can be awful, there is something deeper to Betsy’s interactions with Fantomex. It’s not so much love that Betsy seeks, but acceptance and camaraderie. Sure, there’s sex involved, and proclamations of love, but the act of trusting someone is important. After everything with Angel and Brian in Rick Remender’s run on Uncanny X-Force, Betsy needs a person by her side to love, respect, and trust her unconditionally. In turn, she seeks out someone who would not betray her. When Fantomex was one, it was easy. Now, with three beings, it is difficult to tell where one ends and the other begins. It’s up to Betsy to decide if she can rely on the man she once knew for the support she needs to recover.

One of the best things about this issue is the different art styles for each time period. Talajic and Alphona tag team throughout the novel, creating a different personality altogether at two points in Betsy’s life. One has a sweeter tone to it, more delicate and refined. The other brings a darkness to the page that conveys the grudge Betsy has been holding inside of her for so long. The choice to have two artists work on this particular issue helped drive home the emotion behind the story.

This issue wraps up a major part of the Fantomex/Betsy story. It was excellent, and answered so many questions about Betsy’s state of mind. However, it plays right back into the main story with the Revenants and the owl-like queen. While this particular issue isn’t a great place to start for interested readers, it will help reintroduce the Revenant story. Be sure to pick up next month’s issue and find out what happens to Bishop!