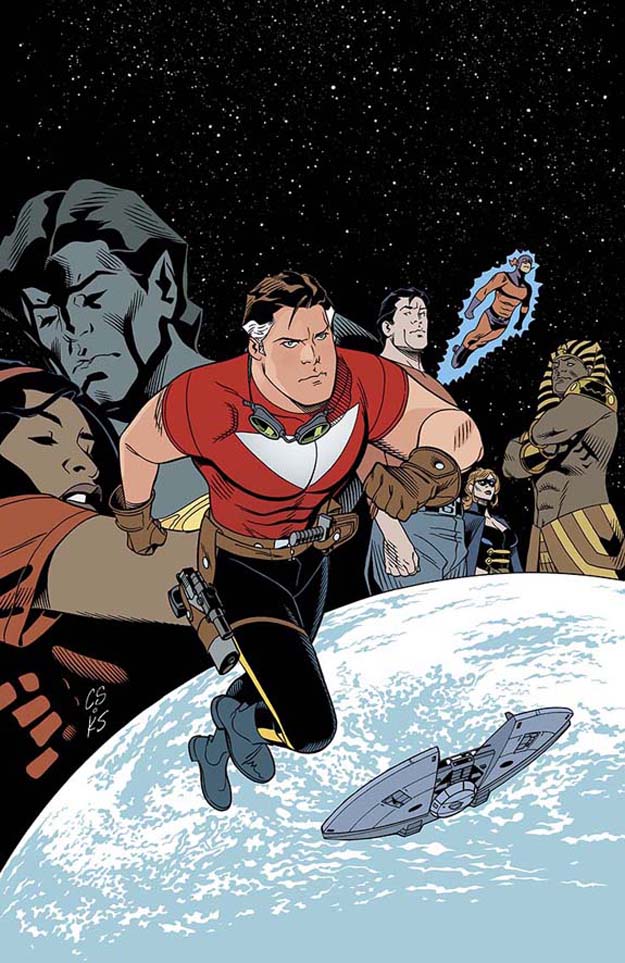 Tom Strong and the Planet of Peril #1

I know it’s been said so many times before, but I don’t know what I would do without the internet and wikipedia. I imagine olden days when the only reliable source of comic information was your local comic shop owner, and while I’m sure many of them were generous and knowledgable fonts of paperback history, I’m also sure that many of them were not. Fortunate, then, that we have the internet and can take a chance on a book like Tom Strong and the Planet of Peril, because without it, these characters would be relegated to hardcore fans and historians.

As you may have guessed, I’m wasn’t familiar with Tom Strong or the universe he inhabits. For those in a similar boat, let me quickly summarize what I found out from the internet: Tom Strong is what is called, even by the characters in the book, a “science hero.” Somewhere between Reed Richards and Captain Marvel, Tom isn’t a billionaire playboy or a benevolent alien but a man subjected to a childhood of isolation in a chamber which eventually gave him his long life and enhanced strength. His scientist parents imparted on him a tremendous wealth of knowledge and here he is, a hero of the people.

We jump right into the middle of the story and the life of Tom Strong right from page one of “The Planet of Peril.” His adult daughter, Tesla, is pregnant and in some kind of distress, and Tom rushes to the lab to find out what is happening. From there, the story only get stranger as Tesla’s alien husband Val, her mother, and Tom look for solutions to her troubled pregnancy. This takes Tom and Val to a planet called Terra Obscura, a near copy of Earth in some alternate universe where superheroes and science heroes are common, and somehow their exploits are recorded in the comic books of our world.

Tom Strong is a creation of Alan Moore, and while Tom feels like Moore’s attempt to create a hero from the age of pulp science fiction like Buck Rogers and Magnus the Robot Fighter, there is still the meta-level self-awareness that the hirsute creator cannot seem to get away from. Don’t get me wrong, though, I dig it. Tom Strong feels like an old school hero who has found a niche in a new school world and while the book is self-aware, the characters are not. They spout their expository dialog with out so much as a wink, which is a bold choice by Peter Hogan in an industry where the accepted method of defusing the inherent absurdity of the genre is by having the characters poke holes in situations before the audience ever has a chance to. I will say, however, that my one complaint about the book is with the dialog. The characters have a bad habit of telling us exactly what they are doing, even though we can see it right there on the page.

Buy It. If you are a pulp fan or a sci-fi fan, give it a try. If you are looking for something new, give it a try. Hell, if you like the cover art, give it a try. This is the second time with these characters for this creative team, and while it’s been over a year and a half since that series ended, this book jumps right in where that one left off. This is, however, the first time on the Vertigo imprint for a Tom Strong book, and I hope these characters find a home there. Give it a try, just know that you might have to look up a couple of things on the internet once you’re done.