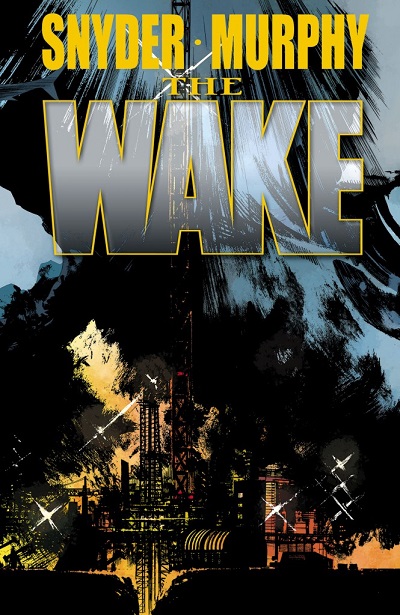 It’s hard at times to pin down the type of series The Wake is. Equal parts mystery, creature feature, action adventure and sci-fi thriller, the book’s combined elements make for a series that causes rabid anticipation for the next issue, but denial of the book’s eventual conclusion. It’s a series that comic fans can rejoice about, and a reminder of what makes this medium awesome.

In issue #3, following another brief glimpse into an undocumented event from the past (this one centering around what looks to be an asteroid hitting a Mars that suspiciously resembles our own planet) we’re thrown into the action as Dr. Lee Archer and company fight for their lives against the now free sea creature. Soon they realize that it may be time to abandon ship, but this will prove to be far more difficult than they can imagine.

After releasing the creature from its tank last issue, Snyder sets to work showing off the type of mayhem it can create. It turns out our scaly friend has a few evolutionary tricks up its sleeve, which lead to some trippy and disturbing moments. As usual, he displays his virtuosity when it comes to juggling story threads, be they past, present or hallucinations. The only real criticism to be had about his writing in this issue is the last few pages when Archer tells the story of “The Loneliest Whale.” This part drags slightly, but the story she tells is so chilling that it’s barely even noticeable.

Sean Murphy’s art along with Matt Hollingsworth colors continue to impress, creating a world that sucks you in with every panel. You can almost feel the moisture on the walls of the rig or the frigidness of the sea water – and when blood spills, it practically lingers in the air. The atmosphere is gloomy and dank, and the action scenes, something this issue is brimming with, are really exciting. It’s great to see how well Snyder and Murphy’s work complement each other.

Buy this book. Seriously, you should be running to your local comic shop with dollars clutched in your fists and foam shooting from your mouth if this isn’t in your hands right now. Snyder’s writing is clever, deliciously terrifying and as unpredictable as ever, while Murphy and Hollingsworth continue to doll out pages that are equal parts atmospheric and frightening. The Wake is a bloody good read.