YE BE WARNED!!! There’s really no way to write this review without spoiling the events of the last issue so I suggest that you proceed with caution. Your other (and the more obvious) option is to go out and buy whatever Fearless Defenders issues you don’t already own, because why would you not? I’m being serious. Go out and by them right now. It’s okay, this review will be here when you get back. Go! Who me? Nah, it’s cool, I’ll wait. I’ll just be here reading my awesome Fearless Defenders comics! Seriously, move!

So here’s the story so far: Valkyrie – warrior, ale drinking gold medalist, and former Doom Maiden to the underworld, has been remiss in her duties to Asgard as of late. You see, she was supposed to select eight women of Midgard to serve as her new Shield Maidens, but that’s not really going so well. On top of this, a large group of ugly Doom Maidens rose from the underworld, and started giving all of the women who came to Valkyrie’s aide a run for their money. During the whole kerfuffle the team’s human friend Annabelle started acting all noble and stuff. Which was really very sweet until it went and got her sent to the underworld. So now Annabelle is there and she’s not really digging on the vibe of the afterlife scene. Valkyrie, feeling understandably guilty, seeing as she’s the one who sent her to live there, is determined to get her friend back – and she’ll do whatever it takes to see Annabelle back in the land of the living.

Phew! Okay, you got all that? Good! Moving on! The Fearless Defenders #7 is by far my favorite book from this week’s releases. Right away you’re going to be weak in the knees when gazing upon the absolute beauty that is Stephanie Hans artwork. For real, where has this artist been hiding? I think I remember her work from some Journey Into Mystery cover art but damn, GIVE HER MORE WORK! Her painterly style brings the pages to life inside your own hands and casts a whole new light on the world that The Fearless Defenders … um, defend? Yes, that’ll do. Take my word for it, Ms. Hans is working on a whole other level here in this issue. 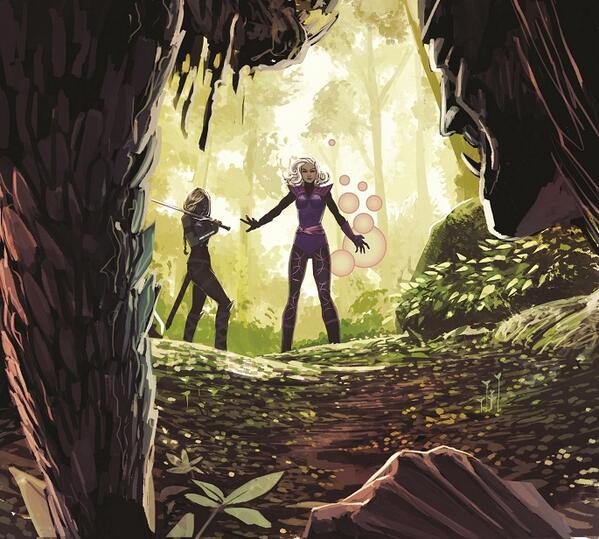 But enough butt kissery! Is it a good comic? Hell yeah it is! In fact, it’s a GREAT comic book. The Fearless Defenders,  has been, (in my humble opinion) one of the best surprise breakout titles of the year so far! It’s got spirit, action, and a momentum that drives its story and characters forward with every issue. This issue was no exception, as it displays an overwhelming amount of sisterly love, and focuses on the concept of responsibility. How would you feel about yourself if you knew you were the reason someone you loved had met an early end? Wouldn’t you do anything to bring them back? Would you still do it even if you knew that it would in some way damn you till the end of your days? What? You’ll think about it? What the hell, man?!

Listen up, okay? If you want a book about an super hero team kicking undead ass,  taking names, and then never bothering to call them back because they’re, ya know, dead, then look no further! I don’t understand how you could not want that? It’s pretty much a recipe for awesomeness. Oh, and it tastes like steel and rainbow cookies. Don’t ask. You DON’T want to know.

A must buy and a great jumping on point for those looking to get in on the action of The Fearless Defenders!

This review was written while listening to the album American Thighs by the band Veruca Salt.