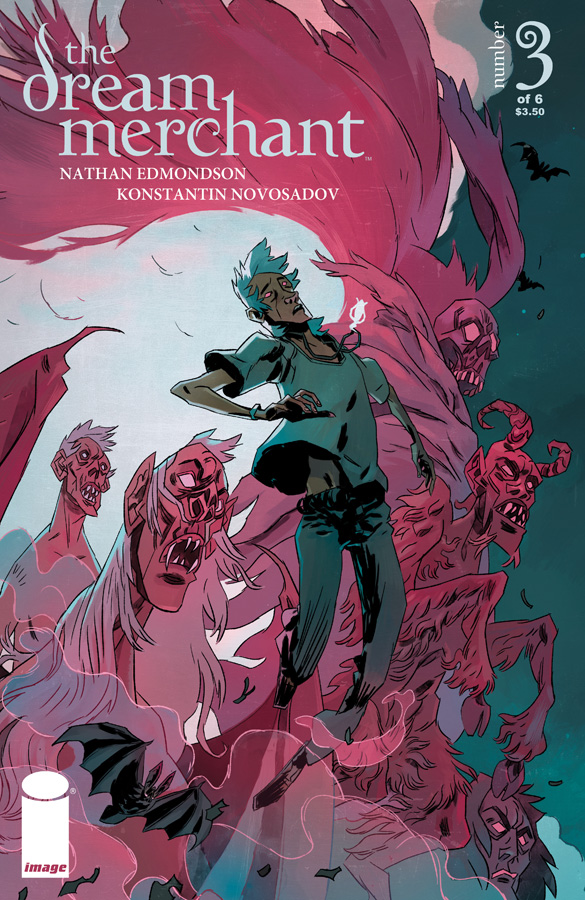 The Dream Merchant has been a stunning blend of fantasy in modern times and comic book storytelling. Winslow, in his quest to discover what is reality and what is dreaming, and Anne, a kind-hearted employee from a mental institute, are on the run from beings from the dream realm. Only the Dream Merchant can help Winslow gain control of his dreams.

As Winslow fights to stay awake, the Regulators creep in closer and closer. On top of everything, their suspicious departure from the mental hospital has the police on their tail – and the weird-looking Dream Merchant isn’t helpful is staying undercover. As Winslow becomes more and more desperate, he starts to learn some of the benefits of his dreams and how he can use them to his advantage. In the end, Winslow makes an important decision regarding his relationship with the dream world he visits every night.

The Dream Merchant has a lot going for it. In the first three issues, it has woven a story that draws the reader in as they try to piece together the rules for Winslow’s dream world and how it effects reality. In addition, Edmondson has created two characters, Winslow and Anne, who have the potential to become deep, multifaceted heroes.

If you are a fan of creepy stories with characters that aren’t shining examples of morality, The Dream Merchants is for you. The plot has called for one character, Winslow, to rise to the occasion. Stories with a fantastic element that call upon a person’s human characteristics have, in my opinion, been a joy to read.