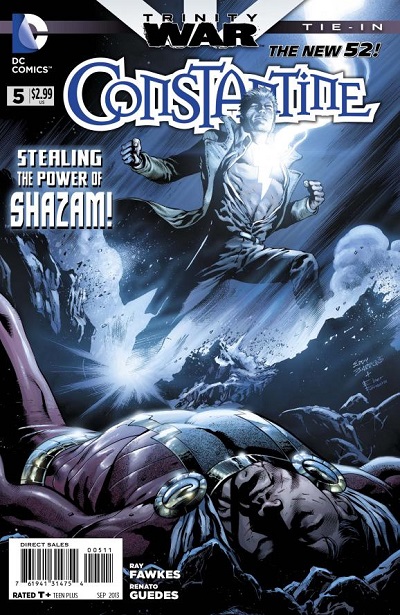 Every child should know this in the modern comic world, but never accept magical advice from strangers.  It’s a lesson that Billy Batson learns the hard way this week in Constantine #5 from Ray Fawkes and Renato Guedes.  Tying itself into the chaos of the current Trinity War, Constantine looks to make a power play of his own amidst the anarchy, delivering this little side tale of betrayal and vague warnings that surprisingly had more to offer as a tie-in than I expected.  So lets take a quick look!

These events take place immediately after this week’s Justice League Dark #22, so be sure to read that first if both titles are on your agenda.  With neither of them wanting to get involved in the punch-em-up mystery that the rest of the capes and cowls are pursuing in Trinity War, Constantine offers for both he and Shazam to skip out on the melodrama and talk more about the mystic secrets of Billy’s real family.  Ever the gilded tongue, Constantine uses this moment to steal the powers of Shazam for himself; taking on the guise of John Shazamtine just as the Cult of the Cold Flame make their move.  Secrets are revealed about just how much Constantine knows about the mystery surrounding Pandora’s Box, and another hero dies as the effects of this situation take their toll.

So the main question many of you are probably thinking is, how much of a crossover chapter is this?  I have relatively positive things to say about that arena.  It is a standalone chapter, meaning those who are following only Constantine need not read all of Trinity War to catchup (and there is a page recap to give those of you an assist); but it does rather seamlessly continue from Justice League Dark #22 while offering tidbits of relevant information to those following the crossover.  I would say nothing game-changing occurs that will not be recapped in a paragraph elsewhere, but overall it is still a nice side story to read of John Constantine taking on the powers of the ‘heroes’ he so cynically views.  The dialogue is snarky in this particular issue, but not as sharp and biting as Fawkes has shown he is capable of in earlier issues.  I’m not sure if this was a conscious effort to soften the harsh edges of Constantine to make him a little more palatable for this tie-in, or if it was the presence of not-so-golly-gee Billy Batson that did it, but it is a noticeable difference in dialogue this time around.

Matching that tone in the artwork, Guedes’ panels look noticeably brighter and full of life this chapter in comparison to the previous issue.  There is still that tinge of unease and darkness, but with Shazam front and center (in either form), there is a lot more vibrancy and color that really changes the feel of the title overall.  It was nice to see Guedes get to unload a little bit with the superheroics (that are distinctly lacking in Constantine regularly), and he offers up a rather disturbingly heroic splash page of Shazamtine battling demons that is a wonderful dichotomy between the Billy and John.

A weak buy at the moment.  Those of you enjoying Constantine in JLD will find a nice side story that pushes his personal narrative forward, while those in it for the Trinity War will find a few scatterings of new developments added in to shine some light on the mystery surrounding Pandora’s Box (if you can trust anything Constantine says of course).  It’s a good chapter, but misses the bar of great by playing it a little too safe for my tastes.