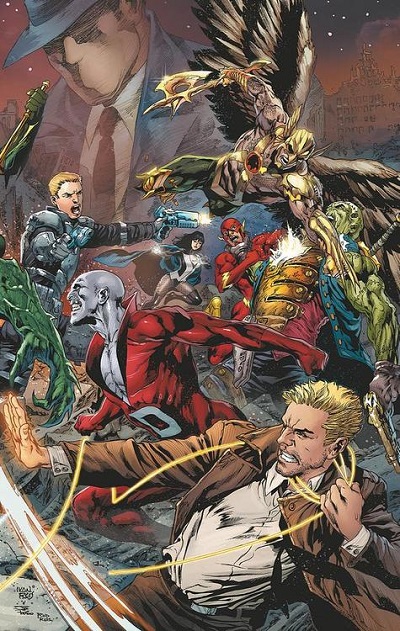 Oh you heroes, when will you ever learn to look before you leap?  That lesson will apparently have to wait another day, as the snap decisions of practically every major protagonist across the DCU causes the Trinity War crossover to escalate in this week’s Justice League Dark #22.  Did you get comfortable with the teams over the last two years?  Or even the last two issues?  Well toss all that out the window, because the lines continue to blur while the rosters are shuffled, as each character follows their own path to solve the conundrum placed before them all.  But with a distinct lack of stability as the central tenet to our storyline, can this issue deliver an entertaining read?  Or will it be buried under the weight of its own shifting allegiances?

The Trinity (Batman, Superman, Wonder Woman) are divided in their methods of solving the mystery surrounding Superman’s recent lack of control that led to the death of Dr. Light.  As Batman and the more logically minded heroes seek a scientific answer, Wonder Woman looks to enlist the assistance of the Justice League Dark to find Pandora; the owner of the mystical box that she is convinced corrupted the sensibilities of her boyfriend.  Not content to sit on the sidelines as one of their members causes such chaos, the rest of the other Trinity (Pandora, Phantom Stranger, The Question) choose their own champions to do what they see as right.  The Phantom Stranger gathers allies to stop Wonder Woman from obtaining and opening the cursed Box once more on this world, while The Question breaks the imprisoned Superman free to aid him in finding the answers to his own deteriorating state alongside allies of his own.  This causes untold strife between the Trinity of Justice League teams (JL, JLA, JLD) that all comes to a head this issue, as the heroes are forced to leave behind their neat little team-based organizations, and make their own personal decisions to start truly fighting for what they believe is right.

Chaos my friends.  That is what this event, and most importantly for this review, this issue, is banking on to create a compelling story; and I will be the first to admit it has its strengths and weaknesses in that regard.  I was absolutely drawn into this chapter while I was reading it.  Characters make rapid-fire quick decisions across the DCU with the information they have at hand to create this amorphous blob of ever-shifting battle lines, and it easily creates an engaging issue that completely delivers a feeling of uncertainty as to how these heroes will react.  On top of that, Lemire is able to craft the issue in a manner that readers can still follow along and see why these characters are choosing the options they decide to pursue, adding a bit of control to the chaos that makes it palatable to everyday readers amidst the confusion.  After I finished my second read through and started thinking about it though, there was one area that caused me to hesitate with a positively glowing review.  But to complicate matters even more, where it slips a little is in an arena that I have problems criticizing it for in this modern era; it almost feels a little too compressed.

I know.  Absolute madness in this age of decompressed stories to a ridiculous degree that I would dare criticize a story for getting to the point in a reasonable amount of time!  It may be solely related to my experience being almost exclusively to the modern writing style, but in its haste to fit this massive tale into six issues, there is a feeling that the personal moments of these characters choosing their actions is glossed over in sacrifice to that time limit.  That is not to say that the characters are just willy-nilly charging off and doing things for no reason.  Not at all.  As I said above, the reasoning is all there as to why the characters are making their choices, but it is an avenue that seems like it could have been explored further as these heroes turn their allegiances on a dime to find themselves facing off against former teammates, friends, and acquaintances.  So perhaps less of a shortcoming and more of a value-add that I would have liked to see, but I did think it at least deserved mention.

Another item absolutely deserving of mention and attention, is the beautiful artwork by Mikel Janin is this issue.  It honestly appears like he looked around at the superstar artists that were illustrating the other issues and thought, ‘Oh yeah?  I’ll show you all up!’.  I’ve been an unabashed fan of his work on JLD to date, but even so, the artwork on this particular issue stands above a lot of his previous offerings on this title thus far.  Even with the slew of characters contained in the story, there is no skimping on detail, as each appearance is given the same amount of care as his own personal team in this chapter of Justice League Dark.  With stunning splashes of the new team dynamics forming up, the focus still lands on the emotional decisions these characters are forced to make, with a lot of that weight falling onto Janin’s shoulders as the story looks to push itself ever forward.  It’s a task he is more than able to step up to, and really saved this chapter from going off the rails of its own constant shifting.

Still handily falling in the Buy column.  While not as strong as the initial chapter, the accelerator is slammed to the floor in this issue to drive the story to new levels of twists and turns.  As stated above, it is absolutely compelling in the moment, and the aftershocks of the decisions made in this issue will have ramifications in the short and medium term futures of these characters.  Excitement, intrigue, and impact.  Sounds like the checklist of a good event thus far to me.