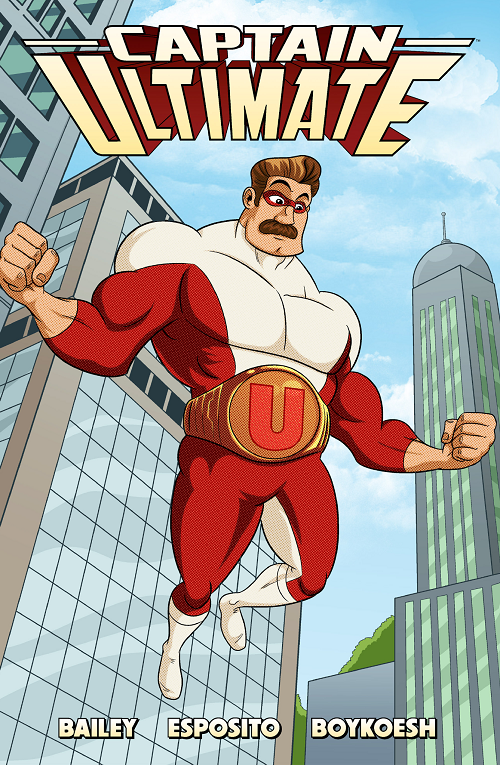 Like so many titles released from Monkeybrain, Captain Ultimate debuts with something fresh and charming. The Captain Ultimate team wants to “return to a time when heroes were heroes because they were just good and heroic and so they did the right thing,” and if the first issue is any indication, the team is already making strides down that path.

By trade I am a grade school teacher, so I am pulled toward those titles that offer something for everyone nine to ninety-nine. From the first page Boykoesh and Ryzowski’s art draws you in with the style and vibrance of Saturday morning cartoons. The style is kept relatively simple for this first issue, but Boykoesh supplies all the right expressions to show that there is some emotional depth here.

Bailey and Esposito also provide a simpler story, but that is kind of the point Captain Ultimate. The goal is to take things back to a simpler time of just doing the right thing. Milo is a kid in a world where kids are more concerned about being a bad-ass than doing the right thing. He’s the kid that gets picked on for doing what you should be doing. People often overlook the power of having heart, but this kid has it in spades.  If Bailey and Esposito keep it up, they may be influencing a new generation of children with these tales.

I have used “simple” several times so far, but I mean that in the most positive way possible. There are many stories out there that are heavy and rich with complicated conspiracies and plots twisting every which way. The simplicity that is found in the pages Captain Ultimate adds to its charm and the overall tone of the story.

Listen, for 99 cents you should buy it. It’s full of charm and heart, and takes you back to the good old days of heroes. Captain Ultimate lacks any of the gloom and doom that lingers in the corners of other superhero stories today, and is all about having fun and doing the right thing. If you got kids of your own, sit down and read it with them, and be the ultimate hero in their lives.