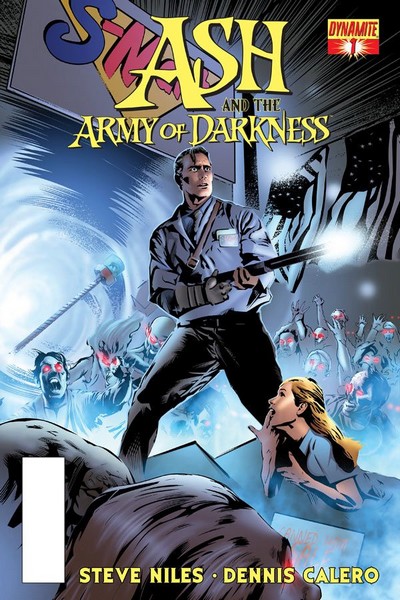 Army of Darkness has been done a few times by more than a few writers, but this time I’m paying attention. Horror veteran Steve Niles will be rebooting the series with artwork by Dennis Calero (Cowboys & Aliens). In case you have somehow been missing the incredible list of works by Niles (and all my reviews of them!), here are a few of my favorites: 30 Days of Night, Criminal Macabre, Chin Music, Transfusion and Lot 13. The official press release from Dynamite :

Dynamite is proud to announce that their flagship comic book title, Army of Darkness, will receive a complete overhaul and a new ongoing series as imagined by Steve Niles, acclaimed author of 30 Days of Night and Batman: Gotham County Line.  A horror/action series with dark comedic overtones, the newly-titled Ash and the Army of Darkness continues the time-traveling, demon-fighting adventures of Ash Williams, the smart-mouthed hero of the 1992 cult-favorite film of the same name.

“What I’m doing with Ash and the Army of Darkness is a complete reboot,” says Niles.  “We start and the last frame of the film and then go right to the next.  It’s a wild ride and I think fans of the film will be very happy because I am bringing back a lot of what made the movie so fun.  My run of Ash and the Army of Darkness takes place almost entirely in the 1300’s setting. That was what made Army of Darkness stand apart.  I’m hoping readers agree. I’m very excited to be working with Dynamite and thrilled to be working on Ash and the Army of Darkness,” adds Niles. “The film is one of my favorites and I think we have a really fresh, exciting take for Ash’s continuing adventures fighting the dead.  Dynamite has been expanding their line and have an impressive array of comic creators working with them now.  I’m looking forward to joining the team.”

“I am really excited to welcome Steve Niles on-board for the Ash and the Army of Darkness relaunch,” says Nick Barrucci, CEO and Publisher of Dynamite. “There’s no writer in recent years whose name has been attached to more bestselling horror comic concepts than Steve, and for good reason — he’s got an amazing talent for writing hard-hitting, white-knuckle, edge-of-your-seat fright fiction. Army of Darkness has a legion of hardcore fans, and they deserve the best. Well, they’re getting the best, courtesy of Steve Niles!” Dynamite expects longtime fans and curious newcomers to welcome a new creative voice, story direction, title, and logo for a horror classic with Ash and the Army of Darkness.

Although I admit I’ve not followed all the comic book launches that have covered Ash’s demon slashing adventures, I’ll definitely be checking this one out. Steve Niles never lets me down when I’m looking for something scary. How do you feel about a reboot on the story?