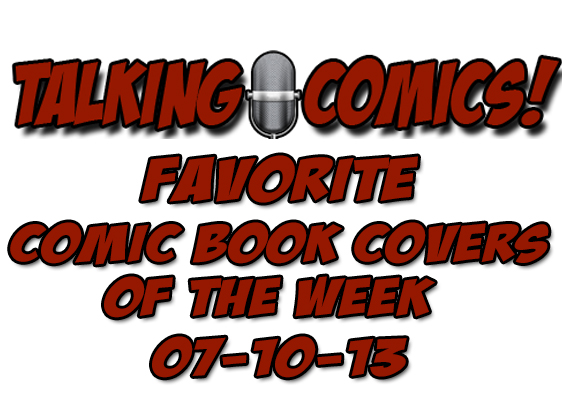 “This cover totally reminds me of an old school horror movie poster from the 70s’. It’s also got that pulp comic vibe going for it as well which is always a treat. The Fearless Defenders covers have been some of the best covers we’ve had all year and this month’s art is yet another addition to an already stellar cache of artful covers.” – Steve Seigh

“Once again, Mark Brooks has found a way to pay homage to the past and yet still be representational of the story behind the cover, in this case one that could have come from an old Atlas horror comic from the Fifties! (Not to mention a “Charlie’s Angels vibe, to boot!) Fearless Defenders will be a title that I’m going to have to buy as a trade just to have these covers (plus the Amanda Conner variants!) preserved in a more substantial way!” – Bob Reyer

“I love the mix of Weird Stories and modern superheroes, especially since the idea of zombie-like Vikings seems to apt to both genres. Great cover, hope it’ll be another great issue.” – Mara Whiteside “Is it me or does this cover not look like Hawkeye is trapped inside of a really awesome lava lamp? Groovy, baby, yeah!” – Steve Seigh

“Francesco Francavilla, whose great cover work on the under-appreciated Red She-Hulk provided me more than a few of these spotlighted items has now graced us with this cover that is definitely “his” but still has that “Aja” feel! I can’t wait to get a peek inside!” – Bob Reyer

“Pretty much every cover of Hawkeye is a given at this point. Beautiful, simplistic and brilliant are just a few of the words I’d use to describe the covers of Hawkeye so far. Gorgeous on every level.” – Travis McCollum

“These Batgirl covers appear to be getting darker and darker as Gail Simone takes us deeper into the emotional tumult that’s become her life. I like the out of focus glow of this cover quite a bit.” – Steve Seigh

“The times they are a’changing” in Batgirl–or so it seems from this image! Alex Garner’s run of painted covers on this title continues to amaze, after those ultra-creepy “Ventriliquist” pieces that I’m still having nightmares about!” – Bob Reyer “This cover is colorful, fun, a reeks of danger! I can’t wait to dig into this issue later this week!” – Steve Seigh “Even though I think this cover has got a real Girl With the Dragon Tattoo vibe going for it (I didn’t care for that series) I love the colors and delicate nature of this cover. I’m not reading Storm Dogs currently but this cover has me intrigued.” – Steve Seigh

*Editor’s Note: Bob and Steve had a lot of the same picks this week so be sure to read Bob’s thoughts in the covers featured above! “For all the grandeur of Alex Ross’ art, for me it is the smaller, more human details that make his work shine. The depth of emotion conveyed by those smiles is absolutely palpable!” – Bob Reyer “Everything is connected, or at least that’s what I’m led to believe by this beautiful cover for Avengers Arena. The way the trees all cast their shadows away from Hazmat while the lines around her feet slowly spread out like a root only hammer in the importance of the end of this arc.” – Travis McCollum

“I love this! Aric is a total badass, but he has a lot of Bravado. The Eternal Warrior has been around the block and he isn’t afraid to put someone in their place. This art is fantastic and really shoes who the bigger badass is.” – Adam Shaw

This list was compiled while listening to the album Sistronix by the band Deap Vally.