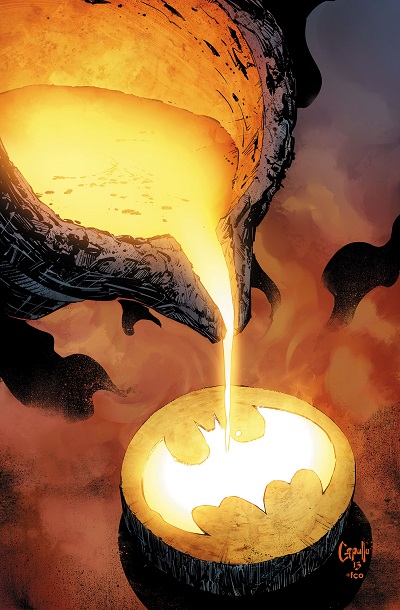 ‘Oh great.  Another loosely knit series of montage training shots as Batman learns to be Batman…again.‘  Bluntly put, that was my initial reaction to the announcement of Snyder and Capullo’s latest arc on Batman going by the title of Zero Year.  But, upon reaching the third page of last month’s first issue in the story, I beheld the most awesome of awesomes; quickly changing my malaise into a visceral feeling of excitement.  I, of course, am speaking of Badass Short-Sleeve Dirtbike Batman™, whose brief but commanding presence jump-started me out of my disinterest and allowed me to find a rather intriguing quasi-origin tale contained within its boundaries.  And while the Brigadier of Badassery continues to elude us in this second issue, what is not lacking is solid storytelling and engaging plot twists wrapped in the wonderful illustrations from Capullo that we have come to expect.

Bruce Wayne continues to leverage his apparent death after years away to operate from the shadows of Gotham City.  Consumed by his mission, he utilizes all of his resources in his efforts to crack just who this new Red Hood character is and what his motives may be.  But after too many close calls, and with the machinations of others beyond his awareness, his time in this comfortable rut may be coming to an end.  With his close confidant Alfred making his feelings known, his uncle Phillip Kane maneuvering the politics of the city to his favor, and a mysterious advisor by the name of Edward Nygma playing a game of his own; can Bruce Wayne find a path to walk that honors both his mission as well as the feelings of those he respects amidst the chaos that surrounds him?

When it comes to rehashes of origin stories already well-cemented in the zeitgeist of pop culture awareness, I am obviously (by my words above) less than thrilled.  Where Snyder has managed to salvage this particular tale though, is by focusing the story on the elements that are often glazed over in these re-tellings.  Our Bruce Wayne is brash at best, not only unprepared for the situations he may encounter, but also blissfully oblivious to the ramifications of his mission on himself, his loved ones, and the city at large.  I hesitate to use the word naive, but his single-minded determination acts as blinders for our hero to these outcomes; and it is on this facet of the origin that Snyder and Capullo seem to be staking their claim for the better.  The dialogue is where the issue shines, with the gloriously witty tête-à-tête of one-upmanship between Bruce and Edward Nygma being the shining jewel amongst it.  It cuts straight to the heart of the rivalry of intellect between these two powerhouses without losing the playful yet competitive tone of their interactions.

Adding to that very scene, Capullo brings out his centerpiece of the issue in this very conversation.  Staging it as an ancient board game of centuries ago set within the backdrop of an Ouroboros, it perfectly encapsulates the visual representation of their twisting conversation cloaked within the boundaries of a ‘game’.  Even before that scene takes place, Capullo’s pencils also capture the naivete of our hero by drawing him in a much brighter and cleaner style than his modern day countenance.  It adds a subtle flavor of how unaware Bruce actually is to the horrors that still await him, and brings a bright-eyed enthusiasm to the character that has been worn down into cynicism over the years.  It’s these little things that really stood out to me during my read-throughs, but the rest of the issue is just as sharp as these few moments.

Om-Nom-Nom.  That is the sound of me eating my words.  Issue #22 of Batman gets a solid Buy from me as it continues to delve into the early career of Bruce Wayne before his mission can change him into who he needs to be to survive its rigors.  It’s a surprisingly fun read, and if it continues on the trail these first two issues have set before it; may end up being one of the more definitive representations of Batman’s first days in Gotham.