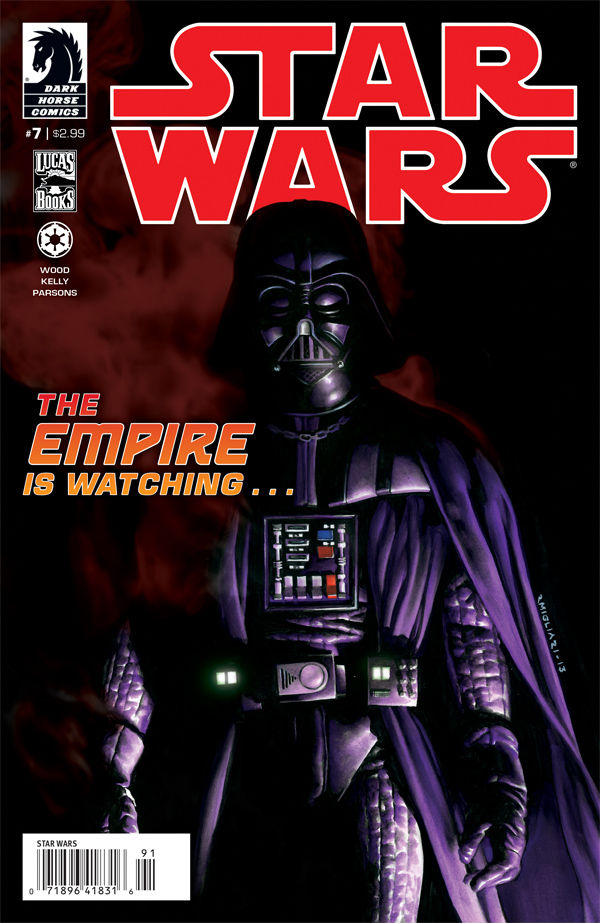 Star Wars continues to kick ass month after month, this time until the carefully detailed pencils of Ryan Kelly (artist of a personal favorite of mine, New York Four and New York Five). This issue kicks off a new arc from this hit comic, and it’s never been a better time to jump in and see what all the fuss is about.

The new arc opens with some uncharacteristic kindness from Lord Vader. Those who have watched all the movies know a little about his personality and past. He’s not entirely evil, though he’s portrayed as one of the most ruthless beings in the galaxy. So when Vader takes a liking to Birra Seah, an acting Moff on the Executor who has pledge absolute loyalty to the Sith Lord, we know that he will protect her as long as she remains in his control. Readers may find this relationship strange, especially since we don’t see Vader show any compassion towards subordinates in the movies, but the act carries well in the comic. If anything, Vader’s pledge to protect whets our appetite, making us eager to see where he is going with this route.

Leia is still on the hunt for the mole in the Rebel Alliance. Though sworn to secrecy, the weight of the responsibility begins to crack as she confides in her friend, Luke. The two share a poignant moment on Tatooine as they contemplate Luke’s destiny and the future of the Rebellion. Quiet moments like this make Star Wars a diverse read. Wood and D’Anda have shown us space battles, hand-to-hand combat, and the inner workings of the Empire. A conversation between Leia and Luke, heroes of the Rebellion, on an Outer Rim planet, reminds readers that Star Wars is more than just a nifty science-fiction story. It is truly a look at ourselves through a different lens, at humanity’s strength and resilience in the face of persecution. Wood’s script, enhanced by Kelly’s attention to emotion and detail, hits home as Luke and Leia discuss the next step in their plans.

In any Star Wars story, we can’t forget our smuggler and his copilot. Han and Chewie are still on Coruscant, and they run into a tough situation that will take more than brute force to get out of. Meanwhile, Leia makes a bold move that has just as much potential to help the Rebellion as endanger it.

Star Wars is a book that fans, no matter their familiarity with the story, will thoroughly enjoy. For those of you worried about jumping into a series, Dark Horse has provided a quick blurb in the beginning of this issue to get you caught up. Further, the first trade, In the Shadow of Yavin, will hit stands September 18th. You can preorder it through Dark Horse or your local comic book shop.