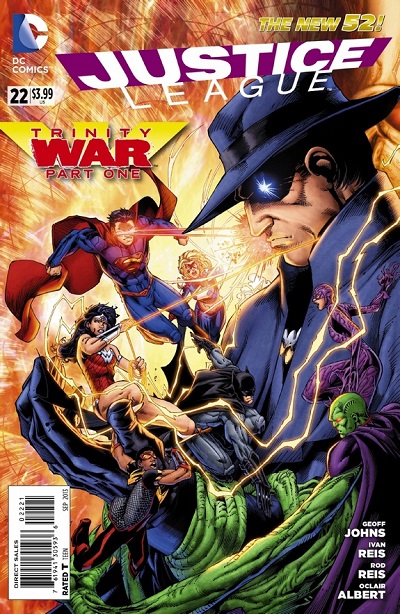 The cards have dealt a mixed hand to DC over the last few months.  Even ignoring the back office outrage of the week from the community, there have been fans clamoring for story-telling consistency across their titles, requests to recapture that feeling of an interwoven universe, and ultimately, demands from some for a reason to care about the smaller stories that have been utilized to establish these characters since the launch of the New 52.  In response, Johns and Reis look to deliver on all three fronts with this long-teased foray into the mythical Trinity War (hinted at over a year ago in last summer’s FCBD mini); and manage to turn the tide for impatiently weary readers by giving an initial chapter that comes out with both barrels blazing.

Framed through the divinations of Madame Xanadu (of JL Dark association), this first issue of the Trinity War starts off politely enough with its thorough descriptions of where all the main players stand as they take the stage… and then immediately ramps up the action into an explosive turn of events that will surprise, anger, and intrigue more than a few readers.  That’s right.  With over a year of stewing on the back burner, there is no more build up to a vague upcoming war, and by the end of this issue all of the teased hostilities between the various Leagues and their shadowy nemesis come into full effect in a somewhat surprisingly cleaner fashion than most ‘heroic misunderstandings’.  There are concrete reasons for all of the chaos, some hinted at while others are blatantly shown, and many disparate threads throughout the DCU are pulled into alignment through the actions of this single issue.  It’s a Herculean feat (admittedly with a lot of fore-planning and staging preceding), and one that DC truly needed to start righting the ship of the universe at large as it moves forward from here.

There are few writers who are comfortable juggling this many independent story threads, but if Green Lantern and the current Aquaman run have shown us anything, Geoff Johns can certainly be counted on that list.  Deftly intertwining the various story beats from around the New 52 into a singular narrative, the event seems tailor made for his style of writing.  While the dialogue lacks the playful flair that he has been balancing nicely of late in the Justice League title, it more than makes up for that with the story’s relentless forward momentum.  Two to three times I expected a page to be the final cliffhanger of this issue only to find even MORE was coming.  And that MORE, with its incessant approach, continued to systematically ratchet up the stakes and intrigue to deliver a great initial chapter to this defining event.

Surprising absolutely nobody though, Reis also brings his standard bombastic pencils to the forefront in this issue; capturing gorgeous scenes of both small-talk amongst our cast as well as the over-the-top action inherent when they clash.  With interspersed splash pages of majestic proportions during key sequences (including a cringe-inducing splash of Superman in action) he is able to transfer a feeling of importance to these momentous scenes without short-selling the detail heavy smaller panels that easily contain even more action than their larger counterparts.  It’s a clever usage of scale throughout the issue that really magnifies the underlying drama; and even more importantly, is absolutely fun as all hell to look at.

Buy.  Setting the stage for new readers to jump in cold while brazenly blazing a new trail towards a more interconnected DCU for veteran readers, this initial issue shows more than enough promise as it kicks off the defining event that DC has been promoting for so long.  Well worth the second look while in your shop this week, and we’ll check in next Wednesday to see if it can live up to that potential when the second chapter releases in the pages of Justice League of America #6!