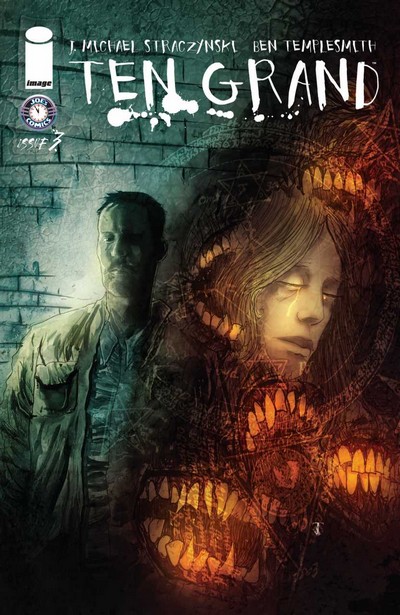 Joe Fitzgerald is a mob enforcer who died (along with his fiancee) while working what he believed would be his last job. An angel spoke to him and gave him an alternative: each time he dies for a righteous cause, he will get five minutes with his beloved Laura before he’s returned to life to hunt down more demons and probably die again. Ten Grand is what it costs to hire Joe to help you out of a desperate situation.

Joe’s most recent client, Debbie, hurled herself off a rooftop while under the influence of demonic bad guys. Joe tried to save her but failed, winning himself five minutes in heaven with Laura but unwittingly opening the door to where she waits for him to those who most want to hurt him. After his return to the living world, Joe takes a closer look at Debbie’s body for clues to her murderer’s identity and discovers that the sister he was hired to find was already lying dead in the morgue by the time Debbie came looking for him. He tries to speak with the their souls using a magical stone but that blows up in his face.

In this issue, Joe’s hunt for he and Laura’s killer doesn’t get much progress, but instead we learn the bittersweet story of their love affair. After Laura saves Joe from a car wreck, he is honest with her about his bloody career and she chooses to stick around. He’s full of admiration for her kindness and shows it by enthusiastically courting her. They fell in love and Joe was so swept up in his happiness that he told his boss he wanted out of the killing business. This was the sad beginning of the end for Joe and Laura. Soon after, they were both murdered by nasty creatures from hell, offered as a sacrifice by Joe’s deceitful boss.

Verdict: Read this or demonic bastard pigs will come and chew your eyeballs. It’s an amazing, heartbreaking story with humor and scary stuff. The art is super duper bad ass creative excellence. If you care at all about filling your head with quality comic book sweetness, you will get your fingers on Ten Grand right now.