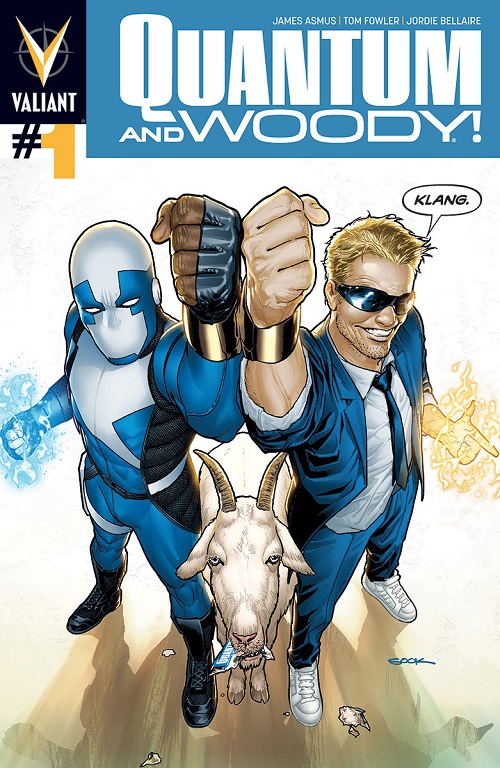 The Summer of Valiant keeps on chugging along with this week’s release of Quantum and Woody #1. Valiant has been marketing this as the “world’s worst superhero team.” The debut issue only helps to support these claims, and provides an enjoyable and humorous reading experience.

In today’s world we love to watch people fail or struggle with their problems, and brothers Eric and Woody are not without their share of problems. The two aren’t blood relatives, but rather brothers through adoption (Woody was in foster care). As the two grew older, they grew apart. Eric entered the army and later the police force, and Woody ended up a small time thief/con man/ indulger of debauchery. From the start things aren’t looking good for a successful crime-fighting relationship.

Through several short flashbacks, Asmus shows us that the relationship between the two brothers has always been a little tumultuous. They may have been closer as kids, but strain isn’t something new. The flashbacks aren’t anything ground breaking in terms of storytelling, but they help to hit the beats, are kept brief, and inject various emotions into the issue.

From the marketing and the various quips Asmus has written throughout the issue, you would pick up a heavy buddy-cop vibe, and Quantum and Woody is very much a street level type of book. Fowler and Bellaire bring that out in their attention to the foreground and immediate surroundings of the characters. The tones and colors used however, remind us that these brothers are brought back together because of a tragedy. It’s not all goats and jokes. There are some real “feels” here.

In addition to being an introduction to Quantum and Woody, issue #1 is very much an origin story issue. Neither of the brothers has any powers yet, or knows what the hell is going on yet. This isn’t one of those, “look at these two guys blasting stuff with powers, but don’t worry we’ll explain who they are later” types. Issue #1 is definitely about whom these two are and where they are going. It’s always exciting to board a new train on an unfinished line at the very first stop.

Buy It! Quantum and Woody helps to fill the void in the street level superhero niche. It’s got emotion, humor, and characters you want to read about. Whether it’s to see them fail or succeed, you should be able to find a reason to get behind them. Do yourself a favor and join in the fun Valiant is bringing again this summer.