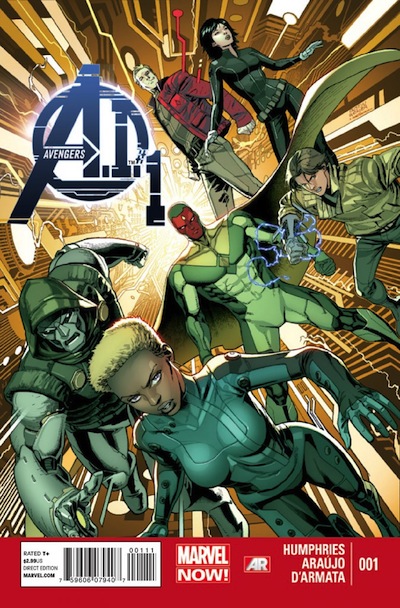 Avengers AI #1 isn’t one of those books that falls into the “love it or hate it” category. It falls more in the “enjoyed it or didn’t enjoy it enough to keep reading” category. I have read plenty of bad comics, and this does not even come close to being bad, but it does fall short of being stellar.

Araujo’s art, along with D’armata’s colors, was one of my favorite things about this issue. The tone created here carries over from Age of Ultron #10AI, and gives us something much lighter than what you might see over in Hickman’s Avengers titles. This book looks like it would pair up well with someone that enjoys Avengers Assemble. This is definitely one of the more “fun” Avengers titles.

Humphries injects some jests and jokes to lighten up what is an incredibly serious situation. Even Vision makes some attempts to joke around. I can appreciate that the collaboration of the whole team presents a pretty unified tone and pace. Everything was presented to give us an enjoyable issue to sit down and read.

My biggest complaint, and the reason I probably will not be picking up this book again, stems from the characterization. This is a number one issue, and by the end of it I don’t feel like I have a firm grasp on who any of these characters are. I didn’t find any of the characters to be particularly sympathetic either. Hank Pym saved the world from Ultron (which he created) by creating an A.I. virus that is now taking over systems throughout the world. This guy just keeps f**king up, and he has to keep cleaning up his own mess. He’s supposed to be one of the top five minds in the world, and he can’t think through his actions? Do I hate Hank Pym as a character? No, but I don’t think anything is presented in this issue that makes me want to keep reading about him.

The issue has some moments of fun, and the art is pretty well done.  The characterization doesn’t have the claws to pull you in, which might turn off some readers. All in all it’s a decent read, and if you’re a fan of Hank Pym, then you’ll want to check it out.