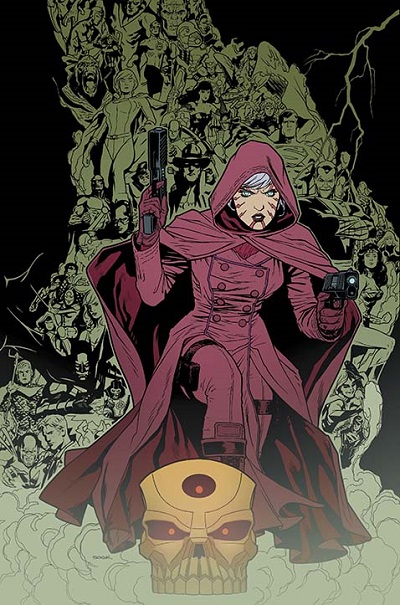 After 50-odd issues playing the role of Waldo in the background of the New 52, Pandora steps front and center to claim the title role of her own book this week in Trinity of Sin: Pandora.  And while more than a few have voiced concerns about why such a relative newcomer should find herself headlining her own title, if she has any chance of doing so it would be now; as we head into the Trinity War crossover that looks to put her at the crux of the conflict.  So lets take a look as Ray Fawkes and company seek to fight against the tide of disbelievers, and deliver a solid read with only a few stumbles that recaps just why we should care.

Aptly titled Three Million Days, this inaugural chapter gives the rough brush strokes of how Pandora came to be cursed, and how she has spent her 8000 years in immortal torment.  Starting from her first discovery of the Box, and leading through her inevitable damnation at the hands of the Wizard (of Shazam fame), we follow Pandora as she continues her futile mission to atone for what she has done.  But what was inside Pandora’s Box?  How has it affected the DCU?  How many immortal residents of the DCU has she crossed paths with?  And has she at long last found the method to answer for her sins?

Those who have been following the sporadic appearances of our hooded ‘hero’ will not find too much new ground in this initial issue.  Going over her original sin and her inevitable punishment at the hands of the Council of Wizards (alongside Phantom Stranger and The Question), we do get to see the training montage of just how Pandora came to be a fighter.  Even more importantly, Fawkes has decided to answer Brad Pitt’s cries of ‘Whaaaat’s in the boooooooox?’ straight out of the gate, furthering the integration of this character into the mythos of the DCU at large.  It’s an admittedly obvious answer to the question, but one that fits quite nicely into the larger picture.  Unfortunately though, we are not given much time with Pandora before her deluge of the supernatural begins, which sadly means we will have to build up empathy with the character as we go instead of it being established at the start.  Fawkes delivers strong dialogue when appropriate, but relies heavily on internal monologue as we recap so many years of Pandora’s history.  Those who are fans of the current ‘Dark’ line will find a lot of similarities in tone and style, and it should find itself a nice niche there once it’s spandex duties are completed with the crossover.

I fully expected the artwork to be an entirely different matter due to the sheer number of hands that were on this initial issue, but was actually surprised to see such a clean transition take place between Sampere and Zircher.  While the two mutually use a scratchier ‘Dark’ style for the beginning of the book, it slowly transitions as time passes into a much more modern conventional look as we hit the present day.  I’m not sure if it was a conscious design decision, but it does do wonders as a bridge between the two artists that curtails any real criticisms I could make about the transition.  The action is admittedly light this first issue, so I am curious as to how it will be handled in future tales; but Zircher shows a lot of skill in capturing entire sub-stories into a single panel as we montage around the world and through time during Pandora’s training.  Overall, both artists bring something good to the title, and I would be content with either direction to fit the mood and tone of the book as it moves forward.

I give this initial issue a weak buy.  There is nothing technically wrong with the title other than its light empathy work, but as a history lesson on the character (which some have already covered over the last two years) it misses out on that Wow-factor that hooks me personally on a book.  Luckily for Pandora, she looks to have a solid month of Wow-factor crossover story-lines ahead of her across the DCU before the second issue drops, so that may be taken care of elsewhere and completely shift people’s opinions by then.