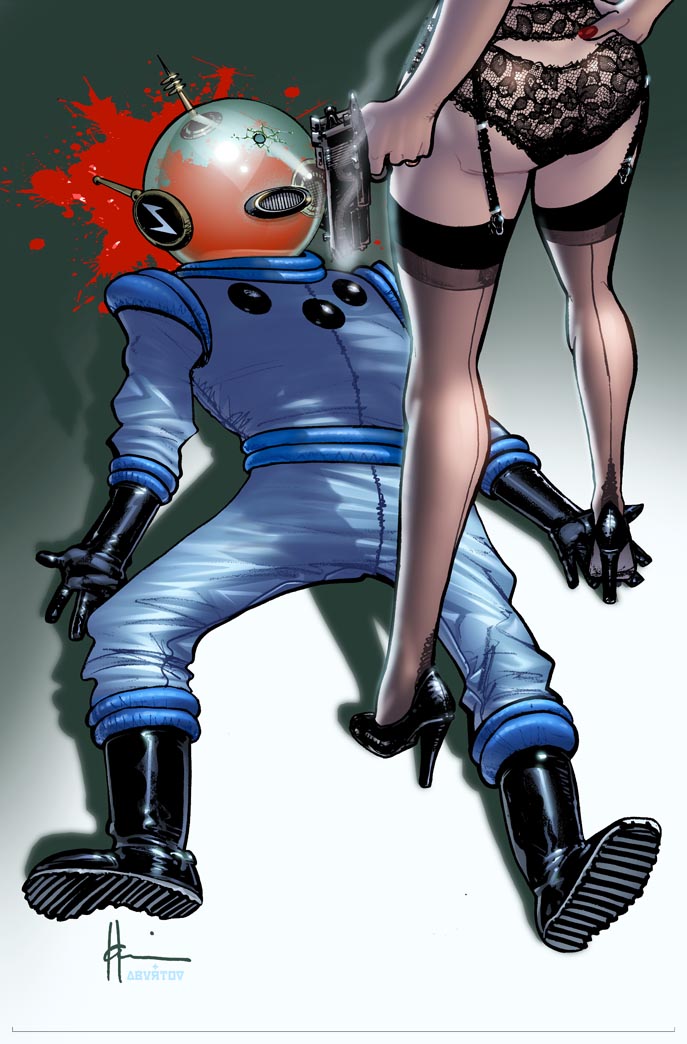 Before we talk about the treasure that is Satellite Sam, let’s take a moment to appreciate Image Comics. Two years ago, I barely gave Image the time of day. Other than Morning Glories, I was not interested in following any of their series. Now, with Saga, Fatale, Peter Panzerfaust, and more, they’ve got my vote for most diverse comic book company. With the announcements from Image Expo, I have never been more excited about comic books.

One comic book series that I have been looking forward to reading is Satellite Sam, a book described as a noir murder mystery soaked in sex and violence. The cover says it all: a cheesy TV spaceman with a bullet through the head lying before a sexy woman with a smoking gun. If that doesn’t hook you, then I don’t know what will.

The story takes place in 1951. The scene opens up with the hustle and bustle of a serial television show, Satellite Sam. There is a lot going on in these opening panels, both behind the scenes and in front of the camera. We are introduced to Mikey, a man behind the scenes who happens to have a father that’s the star of the show.  Throughout the busyness of prepping and taping a show, the crew awaits their main character. When he never shows up, the crew never suspects what happens.

As far as an opening issue, it does not give too much information at once. Instead, this issue acts to whet the appetite, encouraging you to sit back and relax with a good murder mystery. It doesn’t try to dazzle you with gimmicks or flashy scenes. Instead, you feel more like a fly on the wall at a crucial moment.

Matt Fraction is hot right now. He’s had incredible success telling his non-superhero superhero story with Hawkeye, and his FF is both touching and hilarious. Satellite Sam will no doubt be another excellent Fraction masterpiece. Chaykin’s black-and-white interiors add to the period feel, and his character expressions enhance the overall story. Do yourself a favor and look into Satellite Sam this week.