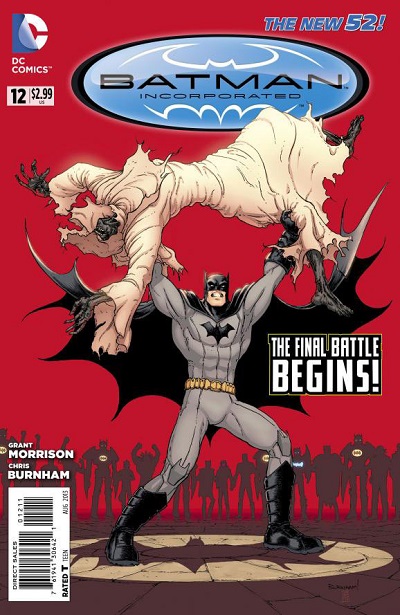 I must be a glutton for punishment.  It’s the only excuse I can make to voluntarily review another Morrison-penned penultimate issue; except this time with the added bonus of years upon years of historic backlog.  That’s right, close to seven years of storytelling work is coming to its close, but it certainly does not feel that way as Batman Incorporated #12 leads us into next month’s big finale.  With more dangling threads than kitty heaven, this closing arc skimps on most of the answers that many were looking for, and instead delivers an action packed showdown between Heretic and the Bat-Family at first glance.

Armed to the teeth with exoskeletons, magical armor, and genetic manipulations; Batman takes the fight to Talia Al Ghul and her Leviathan hordes in response for her previous actions while holding the city of Gotham hostage.  But as the Caped Crusader clashes with the might of Heretic above the streets of the city, the rest of the Incorporated team learn that not all is as it seems as they seek out their ally Wingman who was taken captive.  Can Batman push himself farther than he has ever gone to save the city and get his revenge?  And will they all figure out what is truly happening before it is too late?

Morrison, is his usual Morrisonian style, is telling a multi-layered tale here.  Attempting to cater to readers who have not been on since the very beginning, this issue slightly suffers in comparison to what I was expecting by focusing almost exclusively on the in-your-face climactic battle between Batman and Heretic.  The action is fast and frenetic, and honestly goes a long way in changing opinions of the villainous Heretic while still allowing an enraged Batman the ability to stretch his cape in pursuit of his justified revenge.  Where the issue does fall short though, is in its depiction of pretty much anything else in this second-to-last issue of the overarching saga.

I’m not saying it wasn’t a fulfilling chapter, but with the knowledge of its place in the run and the amount of work left to close out the epic scale of the story that has been crafted; it does leave me a bit wanting, and not entirely in the good way.  That being said, those who have not been along with the ride since years ago are being delivered a surface tale to follow along with.  Vaguely recall a character named Dr. Hurt?  Have no clue what a Hyper-Adapter is?  Don’t be concerned, there is a story being told that you can follow and winds up being a generally good read with more audacity than most titles coming out of the Big 2.  But for those of us that do, there is an entirely DIFFERENT story being told layered in tandem with the one front and center.  One that has 10,000 questions still revolving around it; and this issue leaves an almost impossible amount of work for the finale next month to bring it to a satisfactory close.  But, as I have stated in previous Morrison reviews this late in the run, it cannot be completely judged until the final piece hits the table; so I will come up just short of saying it is impossible until I see how it ends.

The artwork by Chris Burnham does this heavy lifting this time around, easily capturing the chaos of ragey amalgamation Batman against his adversary Heretic.  While the focus of his work is centered on the battle at hand, he also finds the time to humanize some of the other characters that have not had their chance to do so yet.  It’s a strange dichotomy after all of the work the lead-in issue invokes to get you all pumped up for the conflict, only for the art to take the storytelling into a completely different direction (purposefully) to change the narrative that was at hand.  Well done, it is a powerful tool in an artists toolbox, and one that Burnham uses appropriately here.

In for a penny, in for a pound.  While not my favorite of this volume thus far, it is an important chapter that needed to take place in the overall story.  As stated above, those looking for the answers to, well, any questions will have to wait another month until the finale; but taking the issue at face value it is a solid read in and of itself.  But if you have been reading this long, you’re already in it for the long haul anyhow with next month wrapping it all up.

Jump-On Point:  Honestly?  Batman #655-#683 starting from 2006, Final Crisis (along with all of the back-history required to follow it), the death of the title character, the return, Batman and Robin before the relaunch, the first volume of Batman Incorporated, the Leviathan Strikes One-Shot, and the current volume of Batman Incorporated to date.  Realistically?  You MAY be able to piece together what is going on to an enjoyable degree from issue 8 of this volume.