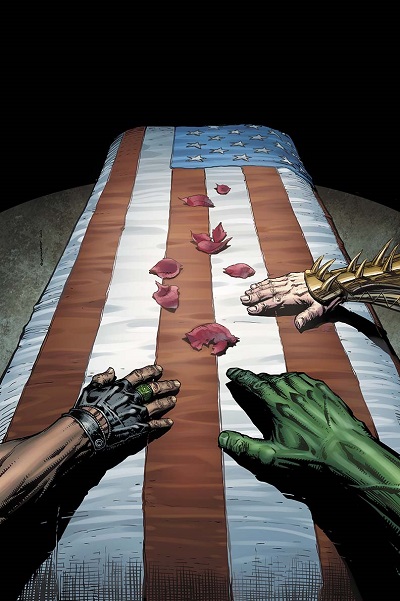 The end is nigh!  Trinity War looms on the horizon!  While the other titles centered in the imminent crossover have taken the time leading up to clear their decks of current story lines and tidy up the standings of their rosters, Justice League of America has been shouldering the burden of setting up the crux of this upcoming conflict; and that continues with this week’s lead-in issue.  But with such a large weight already on the issue’s agenda, will it be able to mix with Johns’ usual multi-plot thread style without one or both being lost under the chaos?  All in all, even with a few hiccups along the way, it just may be able to do both!

One of their members has fallen to the might of the Secret Society, and it appears that the rest of the JLA may be following suite shortly.  But nothing is ever as it seems, as reinforcements and misdirection help to turn the tides of battle in their favor once again.  Will the team be able to capitalize on their turn of momentum to get to the root of this mysterious collection of villains?  Or will they find themselves out of time to get the answers they need?  Meanwhile, we get to see what brought the Martian Manhunter to Earth all those years ago, as Matt Kindt continues his delve into the origins of the green machine in this month’s backup.

Geoff Johns starts to bring his multiple threads into a singular team this month as the members really begin to gel in their new dynamic.  Utilizing a well-placed misdirect from last issue, the spotlight continues to shine on these second tier Leaguers and practically everyone is given their moment in the issue.  Not an easy thing to do when you are also trying to resolve previous mysteries, seed new ones, and continue to setup the upcoming conflict; but it is fairly well-balanced overall.  While the balance is there, the sheer amount of things Johns is trying to pack into this issue does lead to a bit of a rushed feeling, but hopefully these items will be elaborated on during the crossover itself instead of pushed through with the minimal coverage they received this issue.  Characterizations continue to be the strong point of the series though, with some mistreated characters from the first year or two of the New 52 finally getting the treatments they deserve.  It’s nice to see these wayward souls brought back in line, and the mismatch of personalities continues to create drama of its own.

Brett Booth continues to bring the dynamic style of his pencils in this issue, and it is a solid fit for the mass battles present as the JLA and the Secret Society get into the thick of battle.  Each character maintains their own style of combat and posturing, which helps to bring the feeling of these disparate members working together.  Where he does falter is in his faces on occasion, as the few pages of conversation do feel a bit lifeless even as characters argue passionately with one another.  It is something I have seen him handle better in even the previous issue, but a small price to pay for the glorious combat sequences he is able to bring to the title this time around.

The Martian Manhunter backup takes a slight dip this month under the watch of Matt Kindt and Manuel Garcia, as we leave behind a lot of the internal monologue in pursuit of the external forces that have had such an impact on J’onn’s life to date.  It’s a major shift from the previous continuity, and one that on paper is a clever alteration, but shifting from the emotional peek behind the green curtain of the alien’s thought process to a much more physical confrontation is one that I was not looking forward to.  Still solidly executed by both parties though, even if it is a shift in direction that was not aimed at my personal preferences.

Buy.  Not the strongest of buys, but if you are even mildly interested, there is plenty to love about the Justice League of Misfit Toys and the dynamic they bring to a team book.  Even if that is not enough, its role as a driving engine behind the larger plots of the DCU as a whole should seal the deal.  It’s a big title tackling big things, but still centers around the very fragile characters that comprise its roster.