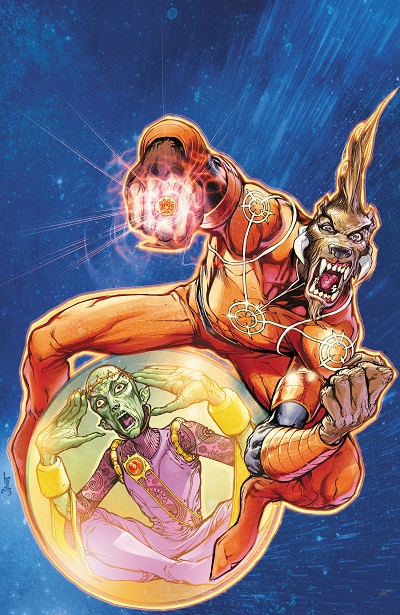 I hear your groans from here.  How, with really good titles getting the axe already, does Larfleeze find himself with a solo title?  Well, to be fair, the Lantern of Avarice stayed true to character; appearing in the backups of Threshold and essentially stealing the book and the slot for his own with his comedic misadventures in space at the cost of that title’s life.  But regardless, we now live in a world where Larfleeze gets to spread his wings to see if he can soar.  Now that it has come to be, will he fall prey to being too much of a one-note joke?  Or will he be able to steal the hearts of the reading community and claim a place amongst the Lantern universe?  Lets find out as we take a look at this week’s #1 issue!

After circumstances caused poor Larfleeze to destroy his treasure horde of claimed items in Threshold (including the only Orange battery that powered his ring), a defeated Larfleeze sits at the edge of creation alongside his cynical slave-butler Stargrave.  As they slowly drift towards certain oblivion, the ring’s final minutes of charge draws closer; leaving them with precious few moments to decide their next course of action.  What better time to tell the sordid history of Larfleeze than now then, right?  An exasperated Stargrave comments on the history lesson, as another cosmic entity inadvertantly crosses their path.  But will the greedy Larfleeze be able to pull himself back together before it is too late?

This title is goofy.  Pulling just shy of slapstick, Larfleeze does its best to offload most of the humor to the wry interactions of Stargrave towards the singular driving impetus of the titular character; and it works to varying degrees.  Utilizing Larfleeze’s obviously revisionist history as the narrative while putting it over the images that depict the truthful versions of each story, also helps in adding a bit more humor to what is essentially an introduction to the character for those who do not know his past.  Those looking for the start of a grand epic will find little in the manner of new developments (besides one large change that will be quite interesting down the line to see how it plays out) in this initial issue, but if previews for future chapters show anything, it is that major shifts are in store for the Orange Lantern as the title progresses.  It embraces itself as a humorous book though, and I am never one to instantly spurn a book looking to bring fun into my reading; but in using the first issue as a recap on the history of the character, it has started off fairly slow on the momentum-meter.

Kolins’ artwork maintains the same saturday morning with a dollop of dark humor approach that he worked the kinks out of during the character’s tenure in Threshold.  It is one that admittedly takes a moment to get used to in comparison to the other Lantern titles of its family, but sincerely does work with the tone of the stories told once you have.  Every page is extremely busy, capturing the almost frenetic pace of Larfleeze as his story leaps to and fro; and while there was a page or two that seemed a little overly line heavy, it works overall for the story being told.  Where Kolins really shines though, is the comedic presence he is able to give the characters through the facial expressions they wear from panel to panel.  It is a strong suite that plays to the strengths of the title, and reassures me that they have found an artistic match for the tone of the series.

Tough one.  I’m going to say hold for now.  It’s humorous, light, and fun, so its faults do not lie there; but if you already know the character, there is not much new for you just yet.  I would suggest keeping a close eye on it for future issues though, as it looks to be heading off into some zany territory that should easily provide both the story and the humor that I was looking for in this initial issue.  Besides, if you don’t support this title, we all know he’s just going to go steal someone else’s book again.