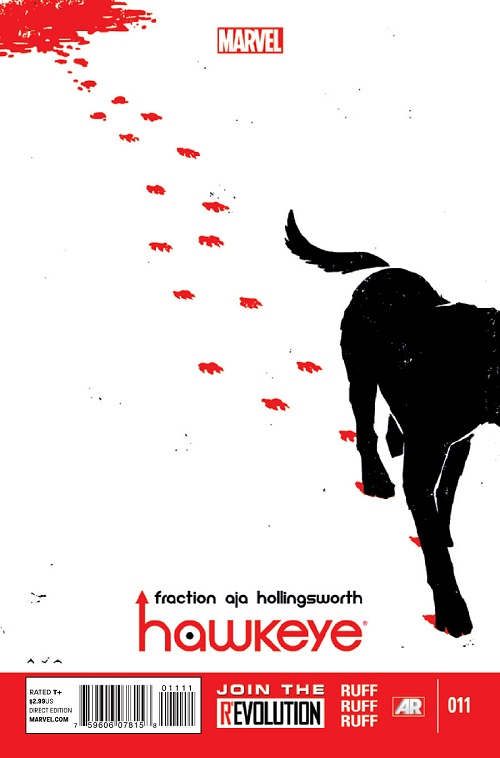 Hawkeye #11 (Starring Pizza Dog in “Pizza is My Business”)

Listen bro, this Pizza Dog centric issue of Hawkeye is one of those issues that perfectly showcases why this team is up for an Eisner this year. From the front cover to as soon as you open the book the fun is already in full stride.

If I recall correctly, Hawkeye isn’t one of the books that regularly features AR content. Hell, I rarely use it, but when I saw the AR logo on the opening credits page, I was intrigued. Readers with the app on their phone will be greeted to a small montage of dog photos from the Marvel editors. It’s a nice touch to a credits page, and gets you smiling before you even read a page.

Since this is an issue focusing on a dog, there is little to no dialog here. What little we get is scribbled with only a few words being legible. It’s what you might imagine a dog hears when people are talking. It’s not revolutionary (Simpsons did it!), but it adds a lot to the issue. We get to see just how much Lucky (Pizza Dog) understands.

Fraction may have scripted the story, but it’s Aja and Hollingsworth that really bring it to life. This is a prime example of showing a story rather than simply telling us. Pizza Dog, like all dogs, gets a lot of his information via his sense of smell, which in this issue is represented by various little icons. The icons are also used to convey his thought process. It’s one of those bits of storytelling that is incredibly simplistic, but brings an entirely new depth and understanding to the characters. As an English teacher living abroad, this is something I can show my students, friends, and wife, and they will be able to make an emotional connection to the story without needing to know much English.

Hawkeye #11 flows beautifully, and hits all of the story beats that a lot of “wordier” comics often fail to hit. There is camaraderie, bravery, humor, and a lot of heart. Personally, this is one of my favorite issues of the year, and it totally lives up to any of the hype behind it.

I am impressed with the level of quality brought by Fraction, Aja, and Hollingsworth in this issue, and also by Marvel for letting issues like this get made. It has been clear to be that Marvel is a company that doesn’t take itself too seriously, and knows when to cut back and have fun.