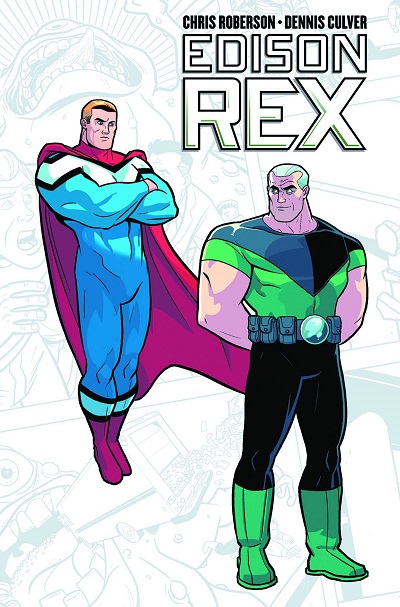 I’ve stated before that a protagonist is only as good as their opposition, but does the reverse hold true when looking through the eyes of a story’s villain?  With this tale’s antagonist thrust into that very role of responsibility, Chris Roberson and Dennis Culver look to answer questions like the above with their entertaining romp from Monkeybrain Comics titled after its nefarious pro/ant-tagonist, Edison Rex.  Luckily for all, Dark Horse Comics has recently collected and published the first six issues in a trade paperback format; so strap on your death beams and formulate your plots for world domination as we take a quick look at Edison Rex.

Foiled at every turn by his heroic counterpart Valiant, the super-genius Edison Rex finally finds the moment to make his all-consuming goal a reality.  But, does proving you are the better man mean that you actually have to become that better man?  Such is the fate of Edison Rex as he comes to the logical realization that Earth’s safety has now befallen to him, setting him on a goofy path alongside some of his fellow villains to both see this responsibility through to fruition while changing the public perception of his heretofore antagonistic ways.  Can this cheetah actually change his spots?  Or will he find that he is his own worst enemy?

One cannot read Edison Rex without seeing the direct comparisons to a Lex Luthor storyline.  In fact, the title is filled to the brim with comedic analogues of Vandal Savage, H.I.V.E., and a slew of other comic-related archetypes.  But where Roberson has leaned heavily on pre-established characters to round out his new world, he also manages to set himself apart through a clever use of tone.  Harnessing the very definition of all-ages comics, there is a light-hearted whimsy that permeates the story and creates a much more Despicable Me direction of villainous rule, rather than a Dark Reign of moral grey-itude.  The title is fun, takes itself just seriously enough to see what life is like on the other side of the good guy tracks, and does a great job of building a comedic comic world populated with humorous super-powered tenants.

The artwork provided by Culver fits practically perfectly by embracing its Saturday Morning overtones, and makes for a title that can be enjoyed by children and adults alike.  Comedic timing in facial expressions is crucial in a story such as this, and it is one that Culver admittedly had some issues with at first, but as he became more comfortable with the world at large was easily overcome.  As we reached the final chapters, there is an obvious sense of joy now that he has found his rhythm, and the fun that he is having is clearly evident in the chaotic and goofy scenes he is able to put together towards the end of this TPB.

Looking for something familiar yet fun?  Then give Edison Rex a try.  While covering relatively well-trodden ground, it’s comedic and light-hearted tone easily bats aside the few shortcomings it has to create a fun ride for all involved.