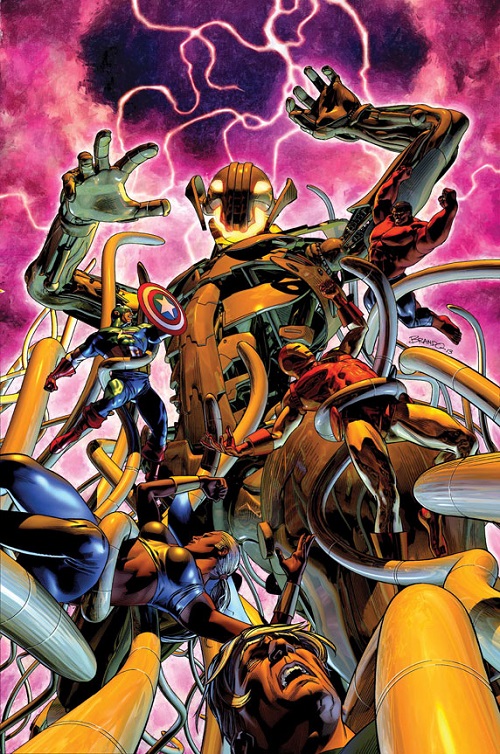 Yup, there are some spoilers. Skip to the verdict if you want to know whether to pick up this issue or the series.

Age of Ultron  has been one roller coaster of an event; one of those old wooden roller coasters. It started off great, and it had its ups and downs throughout the series. Just like those old wooden coasters, the ride wasn’t smooth. You would try to concentrate on the enjoyment, but the rickety old car quickly turned your thoughts to worry.

Issue #10 of the Age of Ultron event is that last little dip before you pull into the station to disembark from the coaster. We get some of those nicer little fun moments that have popped up here and there throughout the series. It’s just a shame that it comes so late, because this was one of the more enjoyable issues.

Looking at the whole of the series however, I would have to say that this finale felt a little anti-climactic. It is not that is was a particularly bad ending, but for the end of a ten issue mini-series, it was lacking. Had the series been condensed down to five issues, I would probably be okay with how everything played out.

There were nine issues and several tie-ins with no appearances from Ultron! When he finally shows up for the first time, there is some fighting with the Avengers. Essentially it boils down to keeping Ultron preoccupied while the virus he’s always had in him replicated itself.

The rest of the issue reads like a rather long epilogue that is setting up the next event. With many of the multiverses shattering from Wolverine’s repeated abuse of time-travel, it’s now obvious that some of these alternate futures will play a role in things to come.

My main problem with the series is that because we spent so much time in these alternate places, the pacing was thrown off, and sucked most of my enjoyment out of the series. Even knowing now that these timelines may be playing a part down the line, I still feel the time spent there was excessive.

We also find out at the end of the issue that Angela (a character from Spawn in the 90s), has now made her way into the Marvel universe. We’ve been seeing tears in the multiverse throughout Hickman’s two Avenger series, so this is a believable way for her to enter. As someone unfamiliar with the character though, this was just another anti-climactic moment for me. It’s just some lady with a space bow and bloody film strips hanging out of her hair.

Let’s take a second to stop and take a breath.

There’s a lot of negativity in this review, so let’s try to look at some of the positives. Overall, the series had some nice art, and in particular I enjoyed the job Mounts and Isanove did on colors. Also, Miles Morales cameo! I just wish we got a tease of who the 616 Miles might be.

I also want to clear the air and let you know that I enjoy and even immensely love some of Bendis’ on-going series right now. Even the best have their bad days.

Age of Ultron #10 brings some enjoyment back to the series. However, it’s not enough to pick up the series and send it out on a high note. At a total cost of roughly 40 dollars, I couldn’t recommend it. Some of the tie-ins, particularly Fantastic Four, were excellent and brought the heart that the main series was lacking. The series suffered from some rather poor pacing, and a fairly lackluster conclusion to the event.

If you are dead set on keeping up with events, I would recommend putting the 40 dollars towards a Marvel Unlimited subscription. You’ll get to read this series in a few months, and you’ll get 13,000 other comics to check out.

Additional: If you have not read Avengers vol. 4 #12.1 (April 2011), then you might be a tad lost with the events in this issue. It’s at this point in the timeline that events get reset. EDIT: This issue is currently free on Comixology, but may not always stay that way. Here’s a link.