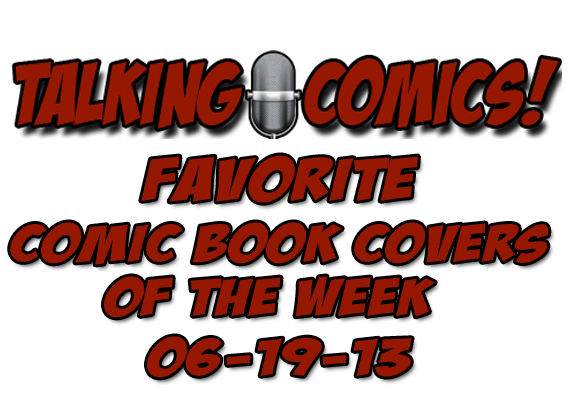 “I really dig the hypnotic nature of this cover. It’s bold colors really draw my eye and I feel like if I stare at it long enough that I might fall into the comic. It’s awesome!” – Steve Seigh “I loved them in The Runaways and they were amazing during the whole Spider Island madness, it’s Cloak and Dagger, y’all! They’re pretty delightful!” – Steve Seigh “I’m pretty certain that I don’t need to tell you why this cover is so awesome. I mean, just look at it!” – Steve Seigh “Black, white, red, beautiful! This cover is pretty epic in its simplicity and I bet it’s going to look even better when you’re holding the comic in your hands!” – Steve Seigh “That’s a whole lot of Doom to be dealing with right there! Mark Bagley really hits a home run with cover depicting the Council of Dooms, although isn’t that the Amalgam Comics character Dr. Strangefate just above Ben’s left shoulder?” – Bob Reyer “Joe Quinones can always be counted on to deliver a cover that conveys the essence of the characters within. On this “call to arms” cover, Mr. Quinones shows us the resolute nature of Kelly Sue DeConnick’s Carol Danvers, if only by her body language.” – Bob Reyer

It Girl and the Atomics #11 “I’m sad that this series will soon be  coming to an end, as I’ll miss my extra monthly dose of the the fabulous colors of Laura Allred enhancing the art of her partner and husband Michael!” – Bob Reyer

AND NOW … ONE FROM THE VAULT!

“When I was a lad, back when dinosaurs ruled the world, the art team of Andru & Esposito on a book made it a must-have for me. Their run on Metal Men remains one of the fondest memories of my childhood. The above picture may or may not be the actual cover, but it’s so evocative of their work through the years, let’s take a pass on accuracy this week!” – Bob Reyer “The Supergirl covers have been gorgeous these past few months. Issue 21 is no exception.” – Mara Wood