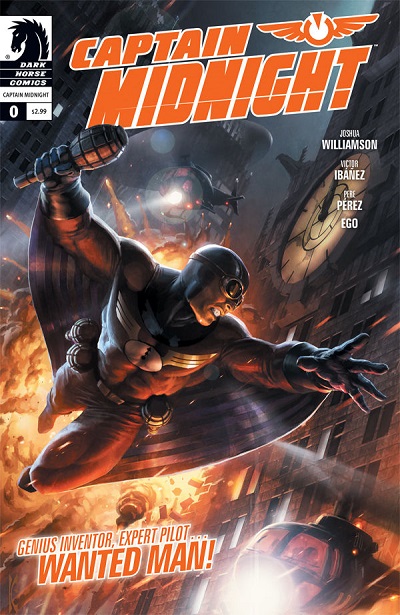 Like the steady cha-chunk of .50 cal Brownings on the nose of a P-38, the serial heroes of yesteryear are systematically entering into the public domain in a rapid succession (and quickly being trademarked by publishers).  The newest contender to enter the fray, Captain Midnight, comes to us from the radio serial plays of 1938’s same name (later seeing publication as a comic from Fawcett); detailing the adventures of Captain Jim Albright as he fought both Nazi and supernatural forces in his quest to help defend the world alongside his Secret Squadron teammates.  But today, while mixed in amongst a throng of these recently open-sourced heroes, Captain Midnight #0 tries to separate itself from the pack by being…well, for the sake of simplicity, actually good.  So lets strap on a pair of aviator goggles and take a quick look at Captain Midnight #0 from Dark Horse Comics!

Mystically thrust into the modern day while his ‘Secret Squadron’ pursued a top secret object in the hands of Nazi operatives at the tail end of WWII, Captain Midnight finds himself on the distrustful end of Navy Intelligence as he tries to acclimate to his new surroundings.  But unknown to Captain Midnight, he did not make this journey alone, and forces align to stop him from completing his decades old mission even as a new generation of allies trace his steps to lend their aid.  Can Captain Midnight convince the U.S. military that he is who he says he is?  And will he be able to get back out into the world to complete his mission before it is too late?

I sincerely went into this title with a quiet resigned sigh.  I know, entirely unfair; but with the recent explosion of pulp re-interpretations of varying success, lets just say that my hopes were not high for another WWII era hero to be brought to the modern day.  Luckily for me, Captain Midnight succeeded in busting through that Fortress of Malaise-itude with its sheer force of fun though; reaffirming my belief that execution trumps all.  A genius of his own day, we are able to skip over the usual technological fish-out-of-water story aspects and delve right into a tale that revels in its campy nature even while combining it with the procedural drama of military interrogation.  The characters are easily recognizable, given rough personality archetypes, and coalesce into a cast that promises a lot of adventure and intrigue to come.  On top of that, even though many future story beats are seeded in this #0 issue (including flashbacks and future trials), Williamson is able to push his main mystery to the forefront to engage readers from the onset; which should be the prime directive of any first issue and one that he is able to do admirably.

The artwork from both Ibanez and Perez harkens back to older serial art in its character design, but strongly blends it with modern direction and storytelling sense to create a story that has the appeal of old works without the drawbacks inherent to them.  Faces are expressive and help drive the story beyond talking heads during key scenes, and the end result helps to make you forget the long stretches of two people talking during interrogations.  Where both suffer slightly is in the presentation of detailed backgrounds, as more work was obviously put into the characters themselves than their surroundings that can cause a bit of a disconnect.  With more action to come in the future, it will be intriguing to see how either can handle the acrobatic stylings of Captain Midnight once he is in the field.

Give it a try!  If you want to check out something new, you can most certainly do worse than Captain Midnight, and you may even find yourselves as surprised as I by how well this #0 issue played out.  Fun, amusing, and still fairly true to its campy radio play roots without alienating new audiences; it’s a solid start to what will hopefully be a beacon amongst the refurbished public domain crowd of titles.