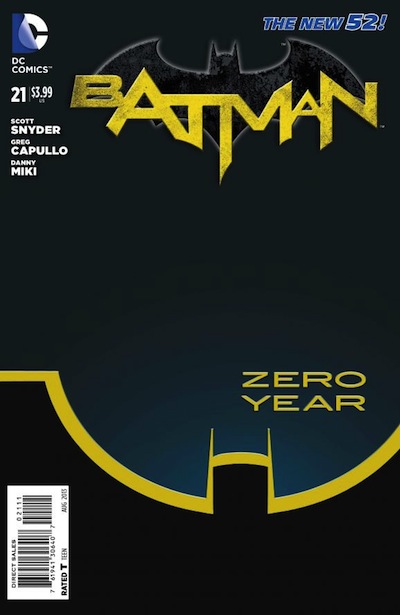 Batman #21, the first part in the new Zero Year arc, is not what you’d expect. As you crack the book for the first time you wil be struck by a world alien to you. This is not what a Batman origin story is supposed to look like. Where is the little boy crying over his dead parents, where are the training montages, and where is the moment where the prodigal son finally returns home? Those things exist, they happened, but Zero Year wants nothing to do with them. This is not Batman: Year One so stop comparing it right now.

I don’t know how you talk very much about Batman #21 without going into spoiler territory, but I’m going to endeavor to do so in this review.  The entire basis of the book has been skillfully hidden from the general public and for good reason.  The delight in the sense of discovery as Zero Year opens is a welcome breath of freshness in an overly spoiled comic book culture. So, be assured I will not take that sense of wonder away from you, but I will do my best to let you know what makes this book standout from the rest.

Writer Scott Snyder’s narrative in Batman #21 is non linear, but never confusing. He, and the great Greg Capullo, use the symbology of the Dark Knight to delineate past from present without the writer ever having to indicate which is which. It’s one of those tricks of the trade that great storytellers often use, and here it prevents the reader from wasting valuable mental real estate on minutia and instead allows them to focus on what’s important; the story and the characters.

On that front Snyder is as spot on with his depiction of Bruce Wayne. Here, the billionaire orphan is younger than in present DC continuity, but he still feels like the same man; albeit a younger, more brash version of himself.  We are so used to seeing the Dark Knight sure of himself, so in control and so methodical that it’s a nice change of pace to see him more off the cuff. It’s also great to see Alfred stay his same stedfast self in the face of a more hot headed Bruce.  This new storyline is a near direct continuation from Snyder’s work on Batman #0 and so we once again have the Red Hood Gang, and their leader, as the main foils. The identity of said crime boss remains a mystery, but there is a fun rat-tat-tat between him and our young Mr. Wayne.

Greg Capullo is once again a monster on pencils. The man seems to be able to handle anything Snyder throws at him and in Batman #21 we get to see him spread his wings and really create on a diverse canvas. This is a Batman and a Gotham City we’ve never seen and once again Capullo, as he did with the Court of Owls, puts his stamp on a little bit of DC Comics history. There is an image near the start of the book which features the Caped Crusader in a tattered costume, riding a motorcycle which may be one of the most bad ass non action poses I’ve ever seen in a Batman comic.

Buy It – If you were expecting Year One this is not it, and that is a very good thing. Batman #21 stakes out new ground in the mythology of the Caped Crusader, by for the first time taking full advantage of the youth of the New 52 Universe. Writer Scott Snyder and artist Greg Capullo are once again insuring not only the quality, but the importance of their work on the World’s Greatest Detective.  Batman: Zero Year is a surprising, entertaining and ballsy take on the character that feels wholly fresh and yet somehow classically Batman.