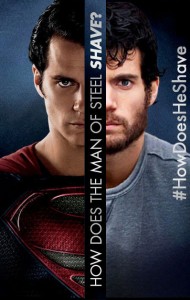 For the past few weeks, you might’ve heard me talking about the Man Of Steel #HowDoesHeShave campaign that was being run by Gillette. I was asking for your theories on how Superman might go from a bearded man to a clean-shaven superhero outside of the reasons provided in the comic books.

The reason was because I was asked to be on a panel to discuss just that: How Superman shaves.

Last night, we gathered at the boardroom at the Scotiabank Theater in downtown Toronto. I still think of it as the Paramount Theater, but that’s sort of off-topic. George Zotti (co-owner of the world famous comic book store, Silver Snail and Canadian Kevin Smith), Rainbow Sun Francks (actor from Stargate: Atlantis, Alien vs. Predator and The Listener) and I were the panelists for this event and Matt Drappel (winner of Gillette’s Drafted series and sportscaster for The Score) was our moderator.

Delicious and not-so-nutritious snacks were provided and people filled the seats to watch us discuss our theories on how Superman could shave. After introductions and Kevin Smith’s video from HowDoesHeShave.ca, we got right into our discussion. I started things off and offered up this theory:

“Kryptonite razors could potentially be really dangerous for Superman, so instead of using a razor, he could use minute particles of Kryptonite ground up into a shaving cream that he would put on his face and temporarily weaken the area long enough to shave with just a normal razor” …a GILLETTE razor, Matt, added. 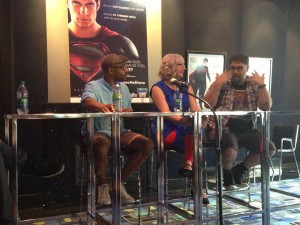 George, of course, couldn’t just be nice and let me have this moment… he had to attempt to tear my theory apart. Jerk. Which, I say in a completely beloved kind of way. Really. He’s awesome.

But next up was George’s theory and he narrowed it down to two possible things:

Next up was Rainbow Sun’s theory and he first addresses a talk we had the other day about the Hancock theory, where he needs something as strong as himself to get the job done and would therefore use his fingernails. Rainbow also noted that Superman could also take a piece of Bizarro and use that to shave with. We asked Rainbow what piece and we didn’t really get a definitive answer, but I think George liked the idea of Superman shaving with a Bizarro rock nipple.

We had a little bit of time left over, so we went into a few other quick talks about Superman and Matt even gave HIS theory which was: Superman just creates a super fast-spinning sort of time-tornado that reverses time to when Superman didn’t have any hair, essentially just reversing the process. Which, of course, means that everyone else’s lives would be turned back over and over again just so Superman wouldn’t have facial hair, but it’s still a pretty fun theory.

I also took the time to read out a couple of listener responses, the first one from Jamie Coe who said that Superman should call up Wolverine and shave with his adamantium claws and Melissa Megan’s answer was that When he flies in from space, the heat from his reentering the atmosphere would burn away all his facial hair. George had a couple things to say about that but we all decided that he could wear a helmet or something to protect the hair on his head that he DIDN’T want burnt off.

I wasn’t too sure what to expect when we set out to be a part of this panel, but the event turned out to be a LOT of fun and is something that I would happily do again in the future. I knew George already, but getting to hang out with him, Rainbow Sun, Matt and the other wonderful people from Procter & Gamble was a blast. PLUS I got to see Man Of Steel again after the panel in the family and friends screening of the film.

You can still get YOUR thoughts in about how Superman might shave via Twitter by using the hashtag #HowDoesHeShave or by checking out the web site HowDoesHeShave.ca. 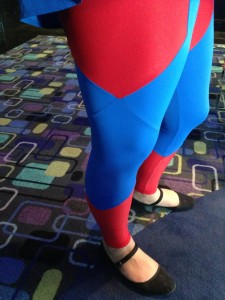 OH, and I wore an amazing Superman inspired outfit to the panel yesterday with leggings designed by the amazing Dani Vulnavia of @SuckersApparel. She made leggings that looked like Superman’s red boots and added a little sass to them by putting red garters at the top for me. I wore a blue dress with them and felt like I was in the right place all evening. People obviously knew what movie I was going to see after all was said and done. Make sure you follow Dani on Twitter and order leggings from her because I swear to you all: I will NEVER buy leggings from anyone else again if I can help it. Dani is fantastic and 100x better than all other legging companies.