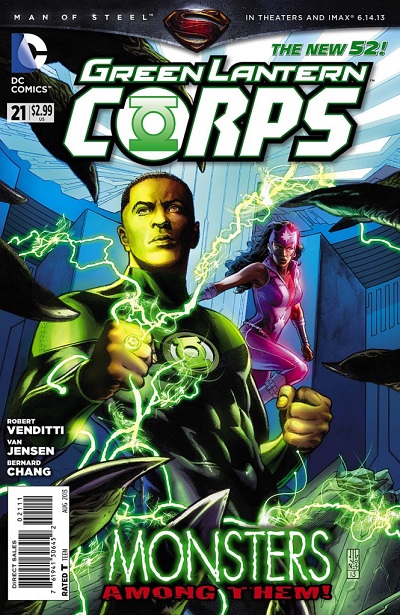 Even after months of reviewing every title in the Green Lantern corner of the DCU, I positively jumped at the chance to cover Green Lantern Corps #21 this week.  With a creative team that has been absolutely crushing it on Demon Knights month in and month out, I was extremely jazzed to see how the relative newcomer Van Jensen would mix into the simplistic and fun stylings that Venditti and Chang have deceivingly made look so easy in their goofy section of the catalog.  And if this inaugural issue of the new run is any indicator of how that will work, it is certainly looking like the ranks of the Green Lanterns are going to be in some good hands.

Dragged into the ‘relationship status’ discussion with Fatality in the midst of combat, John Stewart finds himself thrust into the center spotlight of the Corps title once again as a new antagonist makes its presence known to the pair.  But as they struggle to save 9.8 billion people as well as themselves, even more troubles brew back on Oa and around the cosmos.  Salaak resigns his role after working alongside the corrupted Guardians for so long, and hostilities begin to boil over as individual Lanterns begin laying blame on their brethren after so many friends were lost.  Even with tempers flaring, a new generation of Lanterns are pulled in to replace those fallen comrades; but will their divisive personalities only serve to fraction the Corps even more?

I’ve voiced time and time again my unabashed fandom of Peter Tomasi, so I would be lying if I did not say that this title had some big shoes to fill for my personal tastes.  And while the tone is different, it is a shift that is inviting in its levity without losing sight of the inherent drama that the title has thrived on.  These are not 24/7 soldiers, but human (and/or alien) beings that have suffered a large cost in their most recent victory, and are trying to stumble their way forward from this point.  This has the added bonus of acting as a great introduction to these personalities in a time when both their strengths and flaws are in full effect; which after reading, should allow any newcomers to the title the ability to not only understand what is happening, but also connect with some of these characters personally.  In my opinion, the blend of humor, melodrama, exposition, and characterization are all balanced to allow this to be a prime jump on issue for interested readers.  Something that is very difficult to do with a title of this broad a scope.

Bernard Chang has a cartoony style of his own that unsurprisingly meshes extremely well in the technicolor world of the Green Lantern Corps.  This lighter fare has the unforeseen benefit of dulling the harsher edges of what is essentially a military book without losing the emotion behind the combat.  What this means, is that for the first time in awhile, I am able to allow my son to also join in on the fun (who absolutely adored the new look) with less concern about the brutality of war being depicted in its gruesome glory.  It’s a style that I have grown used to in Demon Knights, and continues to show its simplistic emotional resonance even when moved over here to the Corps.  It is a jarring change for those used to Gleason or the more recent Pasarin, but looks to be a unique and entertaining interpretation on this part of the DCU.

Buy!  If you are interested in joining in on the expansive (and more often than not daunting) world of the Green Lantern Corps, you will be hard-pressed to find a better time or issue than this week’s #21.  Amusing for veterans and understanding of newcomers, this issue looks to be a great start to a new era of the Corps!