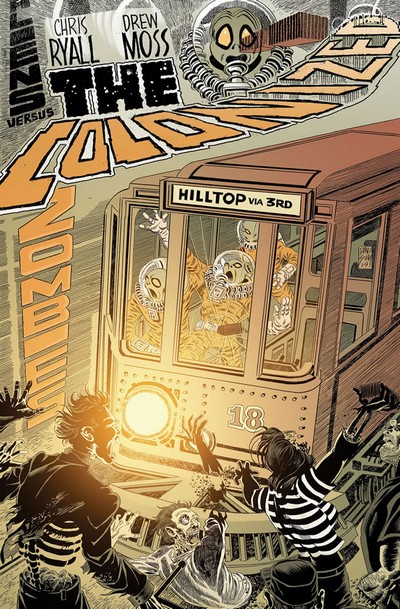 The aliens have landed and the dead are rising in Carbon Falls, a separatist community. The locals were just recently wrapped up in their own drama, fighting over who will take over leadership of the town after their established figurehead died. Now, they have much bigger fish to fry and their beloved town is quickly becoming a wasteland of zombie flesh.

An ATF agent that snuck in to the town hoping to find an artillery stash has discovered an even bigger secret and put himself on the dinner menu for the zombie horde. Local redneck spokesman and gun enthusiast Randy Roy has a big plan to end the whole fiasco, without thought for the few living towns folk still struggling to survive. Hux continues with his plan to dig up his father’s grave, with the help of the alien leader, to retrieve something he believes could save the town. Randy has no idea what Hux is up to and Hux has no idea that the only living people left are currently barring the windows and doors of his family home, desperately trying to protect themselves from the zombie town.

The Colonized has never taken itself seriously and that is becoming even more evident as the story fleshes out. Goofy Randy Roy’s plan looks like it could end the zombie infestation but take down everything else too. It’s all just a bunch of wacky, off the wall tomfoolery going on with zombies and aliens running amok, but it’s pretty entertaining.

Verdict: I’m sticking with it. It’s a fun, easy read that hasn’t been too predictable yet and it’s weird in an unoffensive way. Aliens and zombies shouldn’t happen together, but Chris Ryall has made it happen in a somewhat explainable fashion. I like that The Colonized knows exactly what it’s purpose is and hasn’t tried to over step that, so you can just go along for the ride without much mental investment.