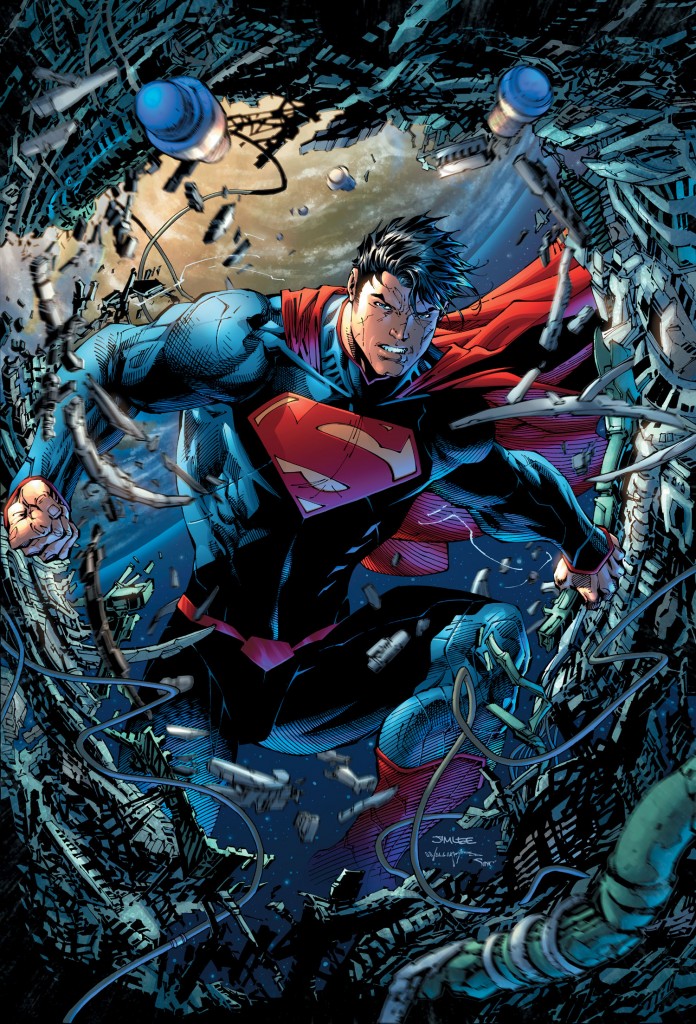 There are creators that make you stand up and take notice. Writers and artists whose very names change your perceptions and expectations of any book their name ends up on. In the last two years there is perhaps no bigger name than that of Scott Snyder. His work on Batman has been universally lauded and that work has driven the sales of that comic to its highest numbers in years. Jim Lee is a name that speaks for itself. He is the closest thing the comic book industry has to a rock star, and love or hate his work over the year you can not deny his vast influence on the industry in which he works.

One of these names is enough to elevate a book, but when with both of them together it puts the anticipation and the expectations at stratospheric levels. These are the conditions into which Snyder and Lee have brought Superman: Unchained into the comic book landscape. The title hits stands on a wave of hype, but also on one of hope. This is the book that’s supposed to put the Man of Tomorrow back on top, and rescue him from the prevailing notion that he been misused in the DC New 52.

So, how does the book stand up to those lofty expectations? The answer to that is not so simple. As the book meets them in ways, exceeds them in others and in the rarest of instances falls just a little short, but this is still by far the best Superman story to come out of DC in quite some time.

The thing about Unchained  that is clear from the outset is just how well Snyder gets the character of Superman. His Clark Kent may not be the bumbling oaf of the Richard Donner films, but he is a character of quiet confidence and unwavering integrity. I’m very taken by the idea of Clark as a crusading journalist, and someone who is just as much a hero behind a computer as he is flying through the sky.

There is a wonderful dichotomy in seeing Superman violently ripping apart a space station while in the same moment using his presence to soothe the fears of the people he is trying to save. To me the balance of strength and kindness is what makes the Man of Steel who he is, and Snyder executes on that perfectly. He also lays seeds in this first issue for a mystery that could redefine the context of Superman for years to come. Will this be Kal -El’s Court of Owls? It’s impossible to tell from this first issue, but the potential is certainly there.

Snyder also spends a nice chunk of time on Superman’s supporting cast. His Lois Lane is sharp minded, forceful, and has a chemistry with Clark that pops off of the page. Jimmy Olsen is a self effacing, loyal friend and the brief glimpse we get of Lex Luthor promises some fun in the future. All of these moments work, but they are enhanced by the fantastic art of Jim Lee.

I found Lee’s most recent work on Justice League to be staggering in scale and beauty, but desperately lacking in any sort of subtlety. So, I went into Superman: Unchained expecting to love the action beats and coast through the character moments on writing alone. I will say now that I was dead wrong. Yes, the action in the book is stunning, and brought to kinetic life by his meticulously detailed pencil work,  but its the quiet moments that left me the most impressed.  Although seeing Superman try to stop a space station  from crashing into the Earth is pretty freaking sweet. So, maybe I’m…equally impressed by both.

The only thing that hamstrings Unchained is how its fits into the current New 52 continuity. It’s an admirable move to try and create an all new ongoing title for the world’s first superhero, but the New 52 has made some changes to the Man of Steel status quo, and therefore Snyder has to take up valuable page space in order to catch up first timers on what’s come before. This need to convey exposition leads to a few instances of clunky prose that interrupt the flow of an otherwise well paced narrative. It also causes certain story beats to feel uneven or oddly placed, but I’m hoping that as it establishes its own flow it will be able to leave those shackles behind.

Buy it – This is a book full of great characters, an intriguing mystery and intense action. The book has some rough edges, but Scott Snyder’s writing is as good as always and Jim Lee’s art is a beautiful thing to behold.  If you’ve been hungry for a good Superman story you need look no further as Superman: Unchained rights many of the wrongs the character has gone through in recent years.