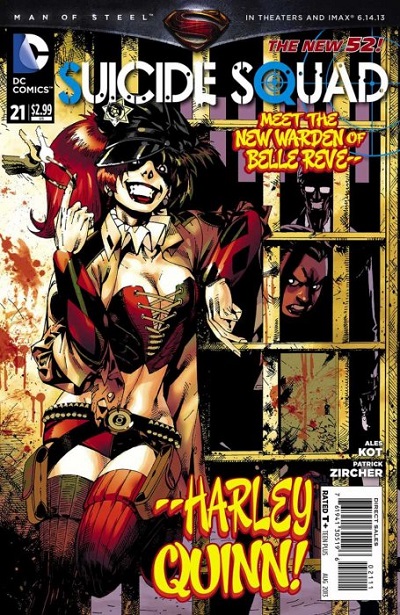 Suicide Squad has always been an enticing proposition to me since I started reading comics.  The sheer audacity of smooshing a bunch of low-rent villains onto a single team and forcing them to work together is really a recipe for never-ending intrigue that should practically write itself.  Unfortunately, even with a setup so rife with possibilities, the execution since this volume’s launch has been missing that mysterious ingredient to allow the title to excel on its own.  That is, until Ales Kot took the reigns last issue.  Elevating the internal strife to a setting of 11 and focusing the camera explicitly on the characters themselves as they deal with it, both Kot and Zircher helped to bring the panache needed to put the title back on track.  But can they keep that momentum going in this week’s issue #21?

All of Amanda Waller’s schemes and machinations come to a crashing halt when Harley decides that the current arrangement of the Squad is self-defeating.  Slashing her way past Waller’s new lapdog, The Unknown Soldier, she confronts ‘The Wall’ with a proposition of her own to make the Suicide Squad the team she knows could work.  But, even with the recently liberated Deadshot on her side, will it be enough to force her will on the indomitable Amanda?  And more importantly, on what side of the line will their devious newest member fall?

The non-spoiler recap above makes the issue sound very light, which it is anything but.  Dealing with such a disparate group of personalities, a properly done issue of this title could easily center on something as mundane as ‘Pizza or Mexican for dinner’ and be the most melodramatic game of cross and doublecross coming out of DC; and I am happy to state that it appears Kot and Zircher agree.  The strength of these newest issues lies in allowing these characters to be their own people, with differing agendas and motives that are more often than not at odds with one another.  Instead of relegating that to the background during another random mission, it is spotlighted front and center as the main attraction, and the title revels in its internal strife.  But, that being said, what would happen if these spiteful people all found a common banner to rally under?  Can they quell their treacherous natures long enough to meet a mutual goal, or would it all just fall under its own weight?  That appears to be the direction the title is heading, and it is most certainly an intriguing avenue to take; provided they can maintain the questionable natures of all the players involved as these last two issues have shown they can.

I am admittedly still not 100% behind the newest iteration of Harley Quinn, and this issue does still trip over the line on occasion.  With that in mind though, there are obvious signs that she is still being dabbled with, and I am hopeful after seeing certain flashes of the character thus far that it will be for the better.

Zircher also continues to bring his fair share of weight to the title as well, providing a tense atmosphere in the way he frames his shots that allow the reader to easily question what the endgame of each character is.  With the focus essentially hanging on individuals talking these last two issues, it has never felt staid or stale; and a lot of that can be attributed to the emotive facial expressions and staging he is bringing to these ‘talking heads’.  Because when everyone is hiding an angle, the subtleties of these conversations are placed almost entirely in the panel that accompanies it, and it is a skill set that Zircher is putting to good use here.

If you are a fan of espionage thrillers, these last two issues have been a great access point into the setting of the Suicide Squad.  I would recommend picking up issue #20 to get a quick rundown on why there is so much tension on the team, but rest assured that #21 will continue to raise the stakes and keep you excited for what is to come.

Jump-On Point: Issue #20 is the start of the new creative team and will bring you entirely up to speed with their current setting.