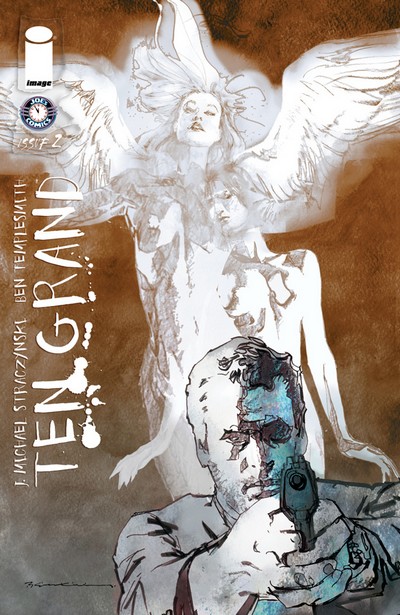 So, Joe Fitzgerald is a mob enforcer who died (along with his fiancee) while working what he believed would be his last job. An angel spoke to him and gave him an alternative: each time he dies for a righteous cause, he will get five minutes with his beloved Laura before he’s returned to life to hunt down more demons and probably die again. Ten Grand is what it costs to hire Joe to help you out of a desperate situation. His latest job is looking for a missing woman who was last seen in the company of religious nuts. The woman’s sister comes to Joe with a photo of the cult leader, who looks exactly like the guy who killed him & Laura.

Joe decides to drop by the Divine Will church and see what the big deal is about this cult that his client’s sister joined. He quickly discovers a demon living in a morbidly obese body, something called a ‘fleshist’. This disgusting creature comes about when a demon takes up residence inside a human body and uses it to experience physical sensations like eating. The demon is a tool for another, serving as a distraction to test the limits of Joe’s resurrection abilities.

Joe fails to save his client when she, too, becomes a tool for a mysterious, dark force with interests in Joe Fitzgerald. As Joe’s five short minutes with Laura come to an end, the powers he is up against are revealed and a glimpse of what they are after.

This story is a spider web of weird characters and demonic, supernatural tricks. Ten Grand rolls along at a nice pace, not too quick to keep up with but never feeling slow enough to get stale. The expressive, skritchy scratchy style of Ben Templesmith’s art works so well with the writing style that it all just feels very organic and natural. Sort of like it was all done by one person rather than two. It’s just wonderful.

Verdict: Buy it, buy it buy it. Read it. Love it. It’s funny, strange, gross, scary, tender, sad and macabre. It is superb.