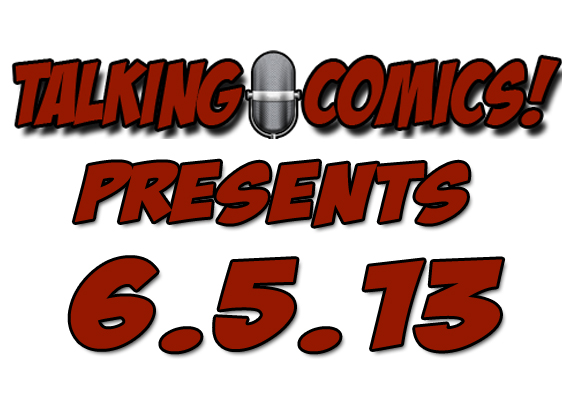 Don’t forget to check out our Podcast on X-Men #1, Our look at the new Forever Evil event,, and of course the reviews from our amazing contributors.

Well, enough with the who, where, what, why and how, I give to you Talking Comics Presents for the comic book releases on 6/5/13. 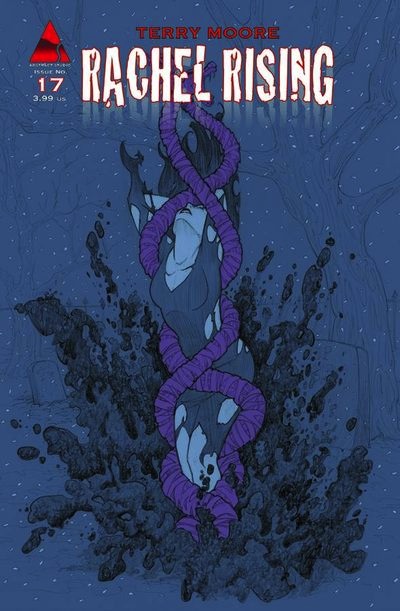 Abstract says: “Natalie was tragically murdered by her fiancé and now Hannah, a 300-year-old witch is living in her belly as a snake. Hannah is using Natalie to wreak havoc in the town of Manson and only Rachel has the power to stop her. ”The creep factor is through the roof in the newest issue of America’s favorite horror comic by Terry Moore.

Stephanie Cooke says: “There will only be 24-issues in Terry Moore’s series Rachel Rising and we’re getting pretty close to the end. Things have been getting crazier and crazier as the series carries on and I can’t even wait to find out what Moore has in store for Rachel and the other characters in the book for Issue #17.”

Mara Whiteside says: “Anyone who has read Rachel Rising knows how special this series is. Every issue is more and more creepy, and the story is getting fantastic. Even if you haven’t read this series, consider looking into buying the earlier issues.” 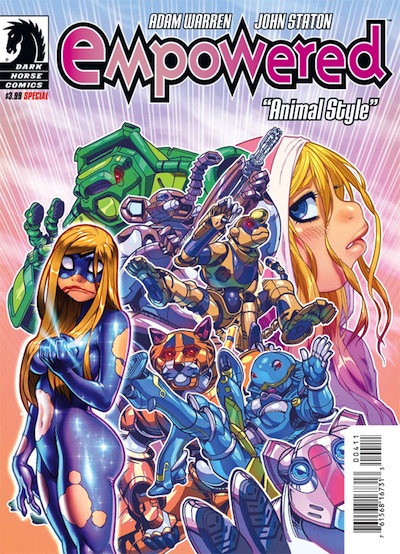 Adam Warren says: “In effect, “Animal Style” could be described as “Die Hard” at a convention center, but with hulking criminal mecha in place of faux German terrorists, and a beleaguered but quick-thinking superheroine in an increasingly tattered supersuit in place of an off-duty cop in a increasingly tattered undershirt. Not, however, that I could claim that “Animal Style’s” lead antagonist, a fairly doofy fellow in a bunny-shaped powersuit, is in quite the same villainous league as Alan Rickman’s superlative Hans Gruber.”

Bob Reyer says:  “Underneath the trappings that make Empowered seem to be pure exploitation, Adam Warren has crafted a series with a charming, vulnerable, and multi-faceted lead character suffused with real-life insecurities, who, because of her wildly-unreliable powers and flaky super-suit, struggles to find her way in the super-hero world as well. Interestingly, despite copious adult content (implied nudity/sexual congress, censored “cussing”, “Damsel in Distress” imagery) Empowered never seems to reach the “ICK! level” that mainstream books with “brokeback-posed” heroines attain.” 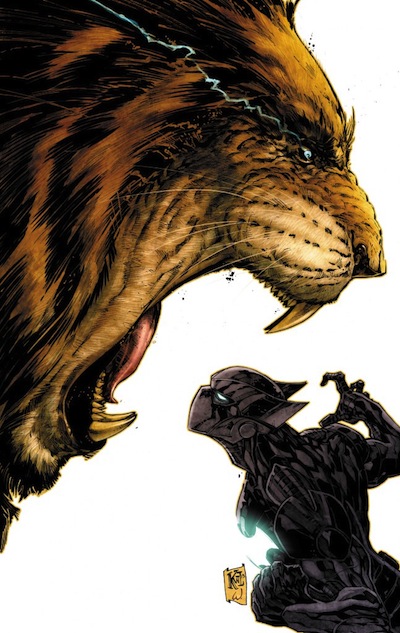 DC Comics says: “Caught in the jaws of Lion-Mane—who is the NEW Batwing?”

Sean Lamont says: “Coming out of nowhere, last month’s soft reboot of Batwing has me clamoring for more.  With the addition of campy but thematic villains such as Marabunta Ant-Soldiers, an amusing and intriguing twist in its storytelling method, and infinitely more playful dialogue; it is a title that I did not expect much from and was happily incorrect about.” 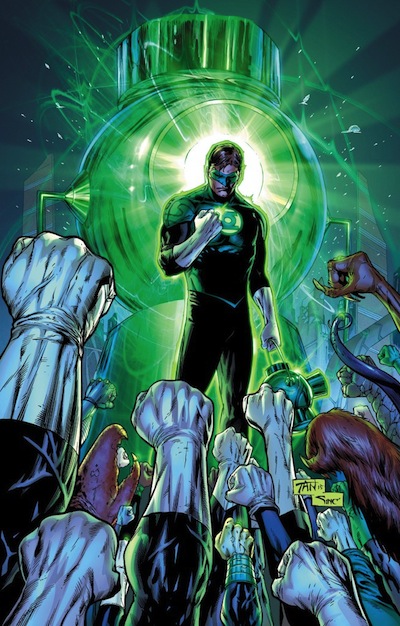 DC Comics says:  “Hal Jordan becomes the leader of the most feared and hated group in the universe: The Green Lantern Corps! New faces, new threats and a new beginning for the GREEN LANTERN monthlies!”

Adam Shaw says: “I was always intimidated with Johns’ run on Green Lantern. Because there was just so much of it, I never jumped on board. I’ve been enjoying what Venditti has been doing over on X-O Manowar. Hopefully this issue of Green Lantern serves as a great jumping on point for newer readers.” 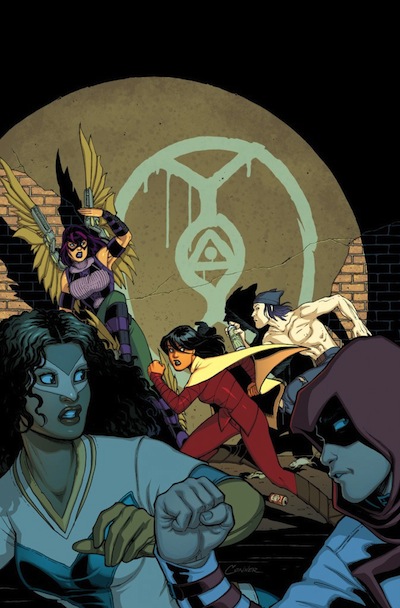 DC says: “The unrest in Coral City heats up as citizens clash with the police. Which side stands to gain when super powered protestors enter the fray?”

Bob says: “I was quite pleased with the first issue of Gail Simone’s newest effort; her usual layered approach to story-telling, balancing the human elements with the super-heroic. However, as we spoke on the show this past week,  on this second issue, as on the initial launch, it seems as if DC is high-lighting the political angle, when it’s the other content that will make readers return to this title. Ah well, the vagaries of corporate America; scuttling a fine new book with poor marketing. Hey, I just had a thought! Maybe a quick cancellation will be a tax write-off for those robber barons at DC!!” 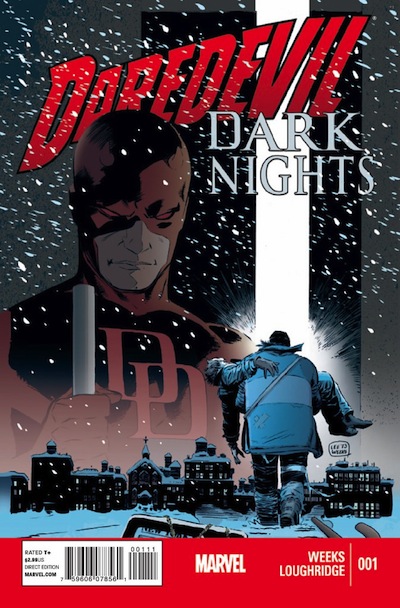 Marvel says:  “A gorgeous new series featuring the greatest talents in comics brings you the rest of the Man Without Fear’s story. Legendary artist Lee Weeks returns to his favorite hero for “Angels Unaware!” A blizzard brings New York to a stand still — and a young patient lies on death’s door unless Daredevil can get to him in time!”

Bobby Shortle says: “Between Brian Michael Bendis’ End of Days and the Mark Waid ongoing series, Marvel has been cranking out consistently high quality Daredevil books. I’m hoping that the more anthology/short story based Dark Knights will continue the trend.” 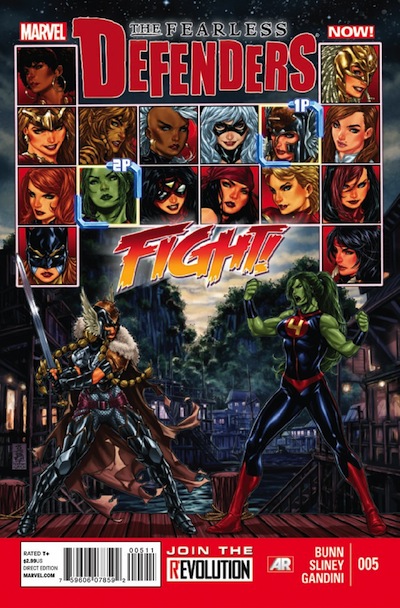 Marvel says: All the fearless ladies on this cover are actually in this issue! • Plus: Valkyrie v.s. She Hulk!

Bob Reyer says: “With the threats of Caroline Le Fay and the risen Doom Maidens as a spur, Misty Knight is calling in the reserves! It should be a romp of an issue, although the revelations about Hippolyta’s parentage from the “AU” issue may put a damper on the fun!” 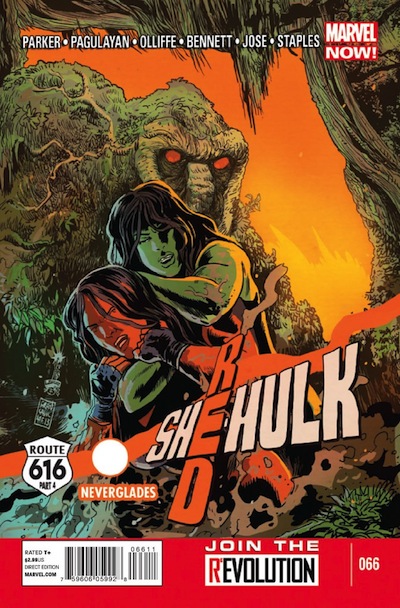 Marvel says: “ROUTE 616 CONTINUES WITH A NIGHTMARE AT THE NEXUS OF REALITIES! • Betty needs to save the future, but THE MAN-THING stands in her way! • The Mad Thinker retools the ECHELON soldiers! •Red She-Hulk versus Green She-Hulk!”

Bob Reyer says: “This has been a fun read on a character that I cared not a whit for until Matt Fraction’s Defenders, and Jeff Parker’s work on this title has added to that and made the transformed Betty Ross into a new favorite.” 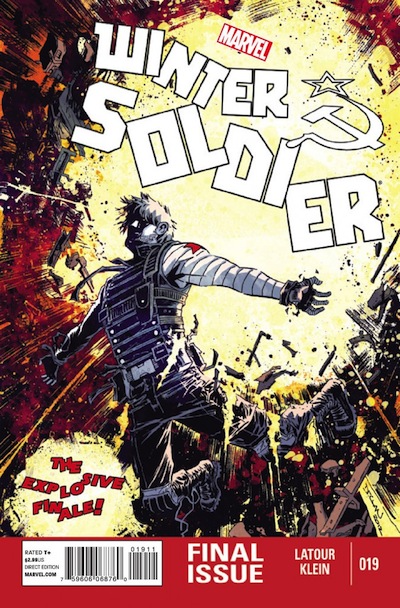 Marvel says: “FINAL ISSUE! High above Earth, the ELECTRIC GHOST has set a plan in motion that tears at the very fabric of reality. As the universe threatens to unravel, only THE WINTER SOLDIER can stop it – But does he even want to? Writer Jason Latour (Loose Ends, Wolverine) and artist Nic Klein (Dancer, Viking, Doc Savage) bring you the fiery conclusion to THE WINTER SOLDIER’S latest deadly mission!”

Joey Braccino says: “And so it ends. Way back when, I picked up the Captain America Omnibus by Ed Brubaker and my understanding and love for comics changed forever. After reading the 25 issues in that collection, I started pulling the single issues of the ongoing Captain America series and I’ve been following the story ever since. When Brubaker left Marvel last Fall, I was glad to see Jason Latour and Nic Klein take over the Winter Soldier spin-off series; I’ve loved Bucky’s adventures since he was reintroduced early in Brubaker’s run, and Bucky’s tenure as Captain America and his ongoing quest for redemption has been one of the real gems of the 21st Century era of comics. Latour and Klein have been spinning one hell of a story with this “Electric Ghost” arc, and it will be bittersweet to read this week’s final issue.”

Bob Reyer says: “What else is there to say but that I’m very sad that this stellar title is coming to an end. I’m still harboring a faint hope for a new, re-numbered volume of X-Factor, but it’s not looking good!”

Joey Braccino says : “The final story arc of Peter David’s X-Factor begins this week. Man, oh man, it seems like just yesterday that Talking Comics’ own Bob Reyer and I were talking up this series for its creativity and its longevity, and now here we stand just one summer away from the final issue. Pick up this issue, good readers, and partake in the glory that is X-Factor Investigation for this last run!”

Stephanie Cooke says: “I think everyone knows that this is a TC favourite, thanks to Bob. This too is coming to an end and I am pretty sad/excited to see how it all goes down.” 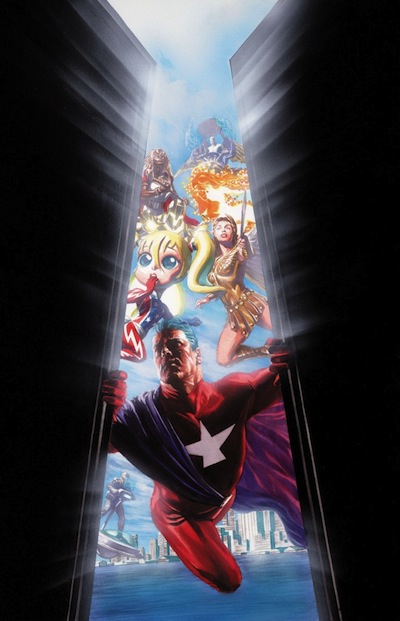 Vertigo says: “ASTRO CITY is back in a new, ongoing monthly series that showcases old heroes and new, as The Ambassador comes to Earth, and an ordinary man is caught up in a cosmic conflict! Featuring the return of favorites like Samaritan and Honor Guard, and the debut of some new sensations! Plus, the seeds of a new mystery: Who is the Broken Man? The entire award-winning creative team is back to kick off a new epoch of the human and the super human. Get in on the ground floor of Astro City’s next epic!”

Bobby Shortle says: “I don’t even know what the previous Astro City books are about, but I love Kurt Busiek and I feel a pressing need to support the Vertigo brand. Plus, the description promises a superhero mystery, and I always love those. 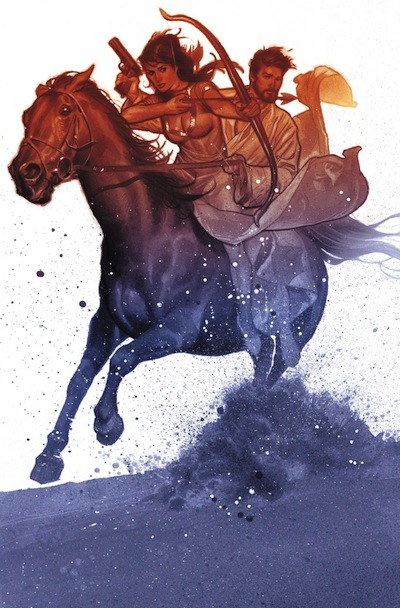 Vertigo says: “In Part 2 of “The Return of the Maharaja,” Nalayani and the Maharaja set out to rid the land of the vicious dhole as her village’s resources dwindle. As the Maharaja continues his advances toward the most beautiful woman in the land, the virtuous Nalayani risks his wrath, and 144 the safety of her village, if she rejects him.”

Stephanie Cooke says: “Sean E. Williams almost made his comics debut with Fairest but instead his Monkeybrain comic Artful Daggers hit metaphorical store shelves first. Either way this is the second issue in his arc from the Fables spin-off and last issue some major things happened and I suspect we’ll be finding out a bit more about what’s going on there. I can’t wait.”

This beautiful art by Andy Bohn and Jean Arrow was sent in by listener John D. who acquired it at Phoenix Comic-Con 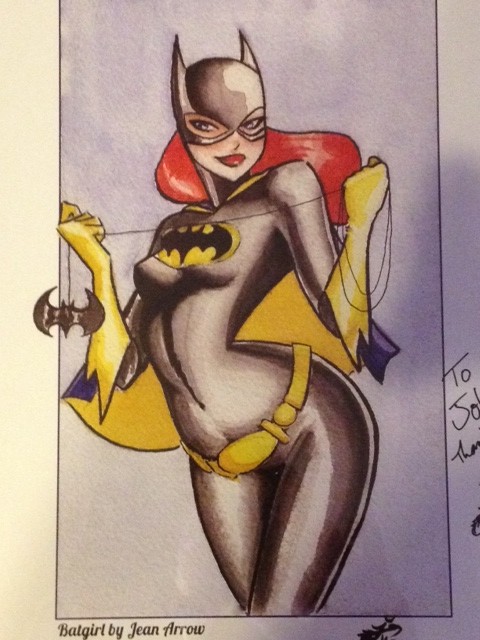 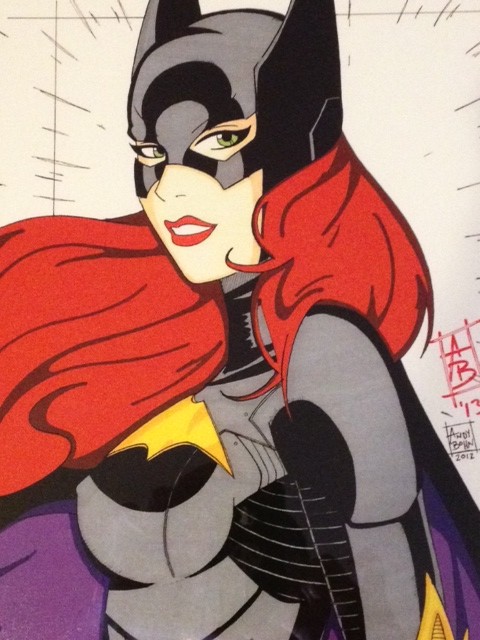