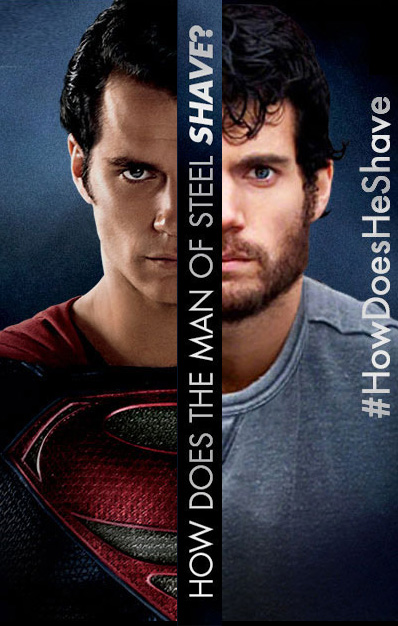 As you’re all (probably) aware, Zack Snyder’s upcoming Superman film, Man of Steel, hits theaters shortly on June 14. Many people, like myself, have super high hopes for the film. There have been a TON of trailers, TV spots, posters and more as Warner Bros. tries to amp up audiences for what is likely to be the biggest film of the summer, but one thing has stood out to many people, including Conan O’Brien.

In the trailer, we see Clark Kent out on a fishing boat or oil-rig or something and he’s not exactly the Clark Kent that we know… I mean, he IS, but the Clark Kent WE know is clean-shaven and has nice, smooth skin. But then we see that he no longer has a beard… which leaves the question: how does Superman shave?

Let’s take a moment to think about this, his beard would be all SUPER too and normal razors probably wouldn’t work.

This brings me to my point: I’m going to be on a Man of Steel panel exactly ONE WEEK from today and I’m pretty excited about it. It’s sponsored by Gillette and it poses that exact same question: how DOES Superman shave?

Kevin Smith, Bill Nye [the Science Guy], Jamie and Adam from Mythbusters and more have thrown their ideas out there and next week is my turn. I want YOUR help though. How do YOU think Superman shaves? Leave your comments and suggestions here and I’ll read the best ones out on the panel for HowDoesHeShave.ca.