May Valiant Round-Up (by Adam Shaw)

Hello everyone and welcome back to another round-up of Valiant news. I first want to apologize to you readers. I had been planning to more Valiant reviews in May, but things happened in my day to day life that took my attention away from Talking Comics for a few weeks. Anyways, I’m back so let’s get this thing a-rolling!

This last month we got a zero issue that focused on the three Anni-Padda brothers before they found the Boon and gained immortality. This issue provided a more in depth look to their background that we’ve only got snippets of through the series proper so far.

The brothers are still young, and the lack of Archer brings a slightly different feel to the issue. It still keeps some of the humor we find sprinkled throughout the series, so it’s doesn’t feel too out of place. If you are interested in reading X-O Manowar this summer or Eternal Warrior in September, you might want to check out this zero issue of Archer & Armstrong to see just how Gilad Anni-Padda gained his powers and became the Eternal Warrior. 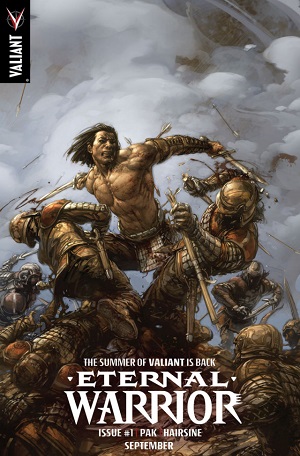 I briefly mentioned it a few lines above, but in case you weren’t paying attention, Valiant will be launching Eternal Warrior in September. It will be written by Greg Pak with art by Trevor Hairsine. This will bring the total number of ongoing Valiant series to seven (Quantum and Woody being the sixth in July). The Eternal Warrior will also be appearing in X-O Manowar after Planet Death concludes. I’m pretty pumped, and in the words of Abed Nadir, “Cool. Cool cool cool.”

Bloodshot will also be retitled after the Harbinger Wars event ends. The new title will be Bloodshot & H.A.R.D. Corps (Harbinger Active Resistance Devision Corps). Man, that is definitely a name reminiscent of the 90s era of comics. I might have to grab a Mountain Dew and get all extreme while I read it!! That or I’ll just sit in my chair sipping boring Japanese canned coffee.

Valiant also released some t-shirts, prints,mugs, and merch for fans to buy. Check out their store and get geared up for the summer con season.

Harbinger Wars has been a pretty awesome mini-series so far. The pacing doesn’t feel slow, and things happen each issue. I’ve mostly been disappointed with Bloodshot and in particular issue # 11. It was largely just a retelling of the fight Harada and Bloodshot had in the second issue of Harbinger Wars. It was told from a slightly different point of view, but overall, I was slightly disappointed with the majority of rehashed content. It didn’t feel like there was any payoff for picking up the issue.

If you aren’t reading the mini-series, then this issue will be awesome, but for someone reading all the Valiant titles, this is the first time I felt I wasted money on a Valiant title. Harbinger on the other hand brought something to the table and showed us something new.

Leading up to the release of Quantum and Woody in July, Joey Esposito (IGN Comics) announced that Valiant has partnered up with IGN to bring a weekly web-comic following Quantum and Woody around. It looks to be mostly quick, fun, one page stories to get us salivating for the series’ release. You can check out the first installment here!

There was a little bit of talk on the interwebs about diversity in Valiant comics as well. Valiant lacks any books with a female character attached as the lead and there were some questions as to whether or not Valiant will be launching any titles with female leads anytime soon. The company said they were aware of the issue, but they want to focus on relaunching more of their older titles first.

For a smaller company rebuilding itself, I can support this decision. Launching an all new unknown title (male or female) could really hurt a company that is only publishing five titles (soon seven). Those older titles they are bringing back still have some fans and name recognition from back in the day, so they can draw on that. That’s pretty much the only reason I even picked up any Valiant title when they relaunched.

With the exception of X-O Manowar (He’s pretty much a loner right not), all of the Valiant titles feature strong female or minority characters. Hell, if it wasn’t for the women of Valiant, Peter Stanchek, Jack Boniface, and Bloodshot would be dead and probably in a ditch. The company is still growing, so let’s give them the chance to develop these characters a little more and get their universe further established. Keep supporting the books, and maybe we’ll get a Dr. Mirage or Zephyr book in the near future (I’m only speculating, but since the original male Mirage had an ongoing back in the 90s, it’s possible the current Mirage’s series is in the works).

That’s all for this go-round. Leave comments below or hit me on twitter@KnowNothingNerd.