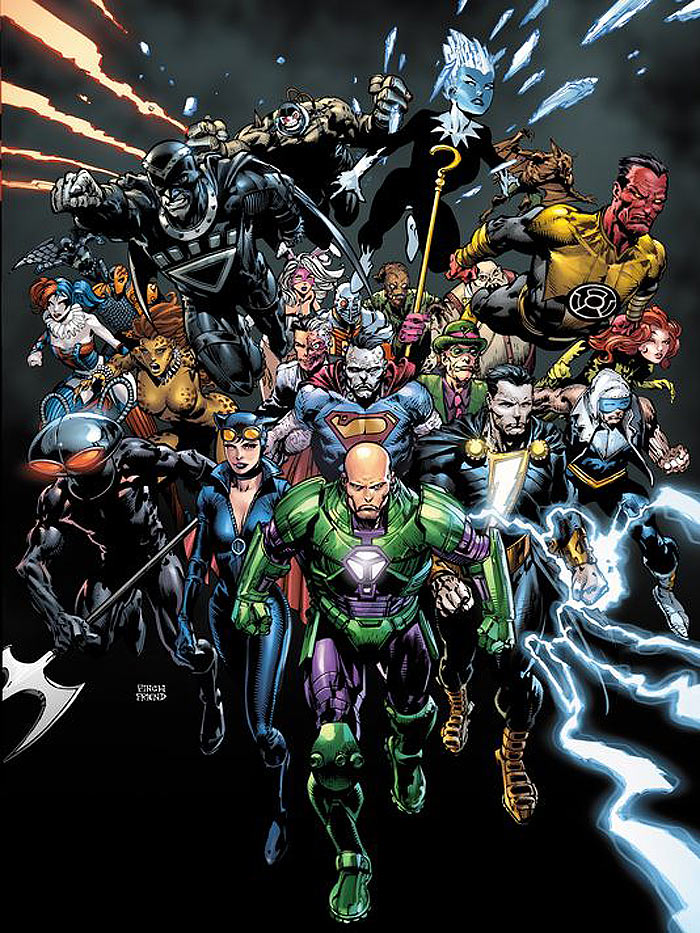 For the past month or so we’ve been hearing rumors about the second anniversary of The New 52 being labeled “Villains Month” with the term “Forever Evil” floating around in recent weeks. With photos, covers and concept images detailing a portion of the announced villains (including Darla Dent, Bronze Tiger and Cyborg-Superman), DC decided to spill the beans with the official announcement of Villains Month, headlined by the seven issue miniseries entitled “Forever Evil.”

Written by the Justice League of America team of Geoff Johns and David Finch, “Forever Evil” takes place shortly after the upcoming Trinity War crossover, which finds the Justice Leagues (America, Dark, Main) out of commission and the villains taking control. The Secret Society of Super Villains and Lex Luthor will lead the crusade, but other characters like Catwoman and The Joker will also play a major part of the event. Johns is especially looking forward to the miniseries, having said this in USA Today:

“‘Forever Evil’ is a chance for David and I to work on all the greatest villains in comic books. It’s literally everybody. I don’t even know if there’s anybody not in it. We’re really exploring what darkness means and the different kinds of darkness that are within these villains.”

Dan DiDio also had this to add:

The events of “Forever Evil” aren’t just contained to the miniseries. Suicide Squad, Teen Titans and other books will be feeling the effects as well and it will ultimately lead to three five-issue miniseries being launched in October that will coincide with the event. Those three books?

Kindt will also be taking over JLoA for five issues, focusing the book on Martian Manhunter instead of the usual team.

Forever Evil #1, as well as all of the other titles in The New 52, will also feature a 3D motion cover. Jim Lee had this to say about them:

“They’re amazing covers. It’s an effect that you haven’t seen before… it’s an entire cover. Any time in the past that they’ve done specialty covers, you would only get like a small trading card size image on the cover that was a hologram or lenticular bit of technology. This is the whole cover and it is amazing. The colors and the depth of field allows you to actually see the logo of the new book. Let’s say the Joker is taking over, it’ll be the Batman title in the background, and you’ll see the Joker title splattered on top of the Batman logo itself. It really sells the concept in a very visual way.”

Along with the specialized covers, all books in the New 52 will be increased to $3.99 for the month. They will return to their regular prices after that.