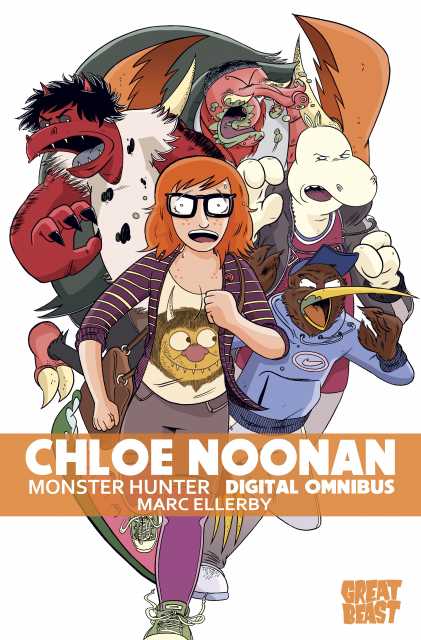 Chloe is part of a top secret organization that hunts monsters. Of course, this doesn’t stop her from sharing her secret with her “horribly fashionable friend,” Zoe. Or stop her from getting annoyed at Buffy and Charmed comparisons. Still, Chloe is a mostly normal girl who’s in a band and again: hunts monsters. With bombs (because she just likes them, ok?!).

It’s got this great Ghost World meets Adventures of Superhero Girl with a touch of something else that I can’t quite put my finger on.

It’s exactly my kind of comic and I love the story, the jokes, the art and the relatively simple colour schemes that go along with it.

There are a series of short stories in the Omnibus edition of Chloe Noonan and each tells of one of her monster hunting adventures. The fact that she’s a monster hunter is more of a setting to Chloe’s life than anything else. The story is really the most fun when Chloe is interacting with her friends like Zoe and Doug. Zoe is a secondary character that really holds the story together. She’s a bit of a ditz, but she keeps the story from getting too serious by being the adorable comic relief.

The designs of each of the characters are interesting and unique from one another. Each have their own distinct style and Ellerby seems to go out of his way to even give background characters their own personalities. The whole comic seemingly draws heavily from the geek community with Gremlin references, Avengers (And Batman even though they’re not even from the same company!), Doctor Who and more. One of the monsters is clearly and awesomely based off of Futurama’s Zoidberg and on occasion is drawn in with some very Zoidbergian sound effects.

VERDICT:
This is another book that I can’t imagine people not loving. The lead character, Chloe is a bit of a hipster but she’s a great leading lady that really has no idea what to do as a monster hunter.

I remember seeing Marc Ellerby at TCAF and seeing Chloe Noonan swag but I hadn’t yet discovered the comic. I’m admittedly a little bummed out now, but hopefully there will be even more Chloe Noonan comics and other fun things for me to buy.

Oh, and you should too.