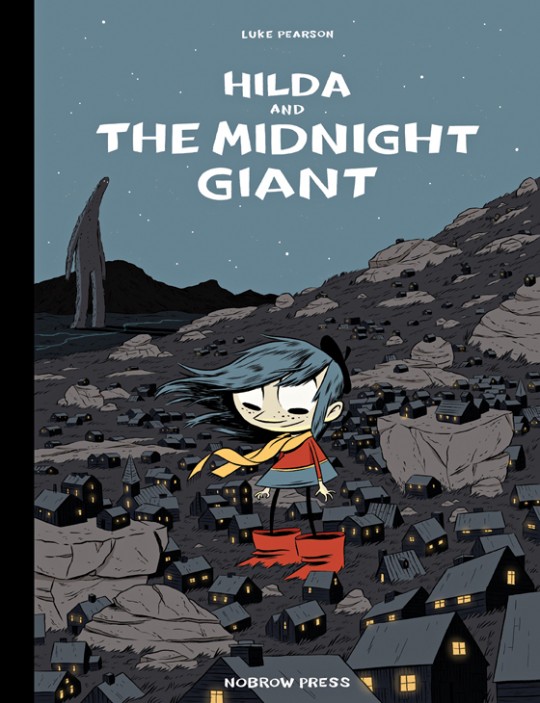 Last year at TCAF, I discovered a book series by Luke Pearson called Hilda. At the time, the only language the books were published in was French. I read a little bit of French, but I would generally prefer to read in English and I decided to hold off on picking it up in hopes that they would publish them in English.

Strangely enough when I was in France this year for Angouleme, I stumbled across the Nobrow Press table at the show. Right away I spotted the Hilda books and leafed through them, expecting to find books solely in French. Much to my surprise though, they had published the stories in English. Well, I picked quite a few of them up.

It took me a while to get to them, but today I finally picked up Hilda and the Midnight Giant and I think that there’s no better word to describe the story other than delightful.

The short comic, geared towards kids, looks like a big picture book from the outside. Of course it technically IS, but you know what I mean. Our heroin is Hilda who lives with her mother in the middle of nowhere. For the past few days, Hilda and her mother have been receiving mystery notes on the doorstep of their home telling them to vacate their homes (or ELSE!). What’s even stranger is that the notes are teeny tiny and no bigger than your fingernail. After a siege on their house, Hilda’s mother tells her that if she wants to stay, she needs to find a way to make the invaders go away and leave them be. So, with a mission in mind, Hilda sets out to figure out what’s going on and to make sure that her and her mother never have to leave their home.

This is a fantastic tale that’s full of magic twists and turns. It simply tells you a story and while the words themselves are wonderful, the images that are put before you instantly put a smile on your face.

One of my favourite things about this story is that unlike so many OTHER children’s stories, Hilda’s mom can SEE the things that Hilda can see. It’s not her looking down on her and just thinking that her daughter is just playing games. Her mom treats Hilda like a grown-up and when Hilda sees things or thinks she sees things, her mom believes her. Which is so refreshing and fun to see in a book.

VERDICT:
Buy it and all the other Hilda tales, ESPECIALLY if you have little ones to share the books with. It’s 100% not necessary to enjoy them, but I know that kids will love these books too, so their added joy I would make the books 10x better.